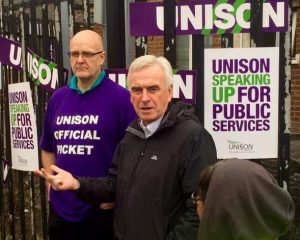 Speaking at a meeting on the first hundred days of a Labour government at Unison conference this week, Shadow Chancellor John McDonnell said that a Corbyn government will repeal all the Tories’ anti-union laws and enact positive legislation for workers’ rights. He also said Labour would back all strikes, in and out of office.

This is very positive. It’s the first time that a Labour leader has talked about repealing the anti-union laws – as opposed to just the the latest one, the 2016 Trade Union Act – since some comments by Corbyn in early 2016. Since then the leadership has submerged itself in the Labour right’s “Repeal [only] the Trade Union Act” line. That is what was included in the manifesto; Labour’s election coordinator Andrew Gwynne told the Guardian the party just wanted to go back to the legal situation of 2015.

John himself has sometimes sounded very unclear on these issues. In contrast, his clear statement at Unison conference reflects the radical policy passed at the 2017 and 2015 Labour Party conferences.

Given the lack of campaigning by the party for this policy so far, and the numerous pressures not to carry it out, it would be wrong to think what John said settles the matter. In practice, it must be somewhere between “will” and “should”. We need to keep pushing.

John’s statement should give us encouragement to build up pressure for the whole party to deliver a clear commitment and campaigning on this. Trade union activists should start by putting the statement initiated by Lambeth Unison and supported by a growing number of union branches and organisations to their branch for endorsement.

• For more on campaigning to repeal the anti-union laws and for a strong right to strike, see here.