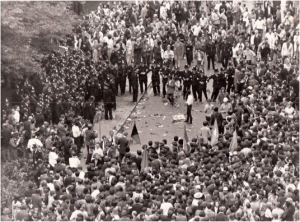 The French upheaval of 1968 had a great impact in Britain, both industrially and politically. The shame is that the different components of the impact were out of sync.

Industrial militancy and shop-steward organisation had been on a gradual rising trend since the mid 1950s. Now striker-days increased from 2.8 million in 1967 to 23.9 million in 1972. Almost-forgotten tactics like mass pickets, mass solidarity strikes, flying pickets, and workplace occupations re-emerged.

Yet in the unions, the decaying, bureaucratic-minded Communist Party remained by far the dominant “left-wing” point of reference. The many workplace activists who wanted a more combative approach were mostly focused narrowly on industrial militancy,with its political dimension only a vague reference to the Labour Left.

In the Labour Party, the old Bevanite movement had expired in the late 1950s. The residues of the Labour Left rallied to Harold Wilson when he became Labour leader in 1963.

The Labour government, in office since 1964, ran into increasing trouble from 1967.

In March 1968 it legislated a sordid ploy to block Asians fleeing persecution in Kenya who held British citizenship.

In June 1968 it reintroduced NHS prescription charges. The same month, a Royal Commission recommended legal curbs on trade-union action: the Labour government would try to introduce those curbs (September 1969), before backing off under TUC pressure.

The US war in Vietnam was escalating, and so was the movement against it: 100,000 people clashed with cops at the US Embassy in March 1968. Wilson was widely seen as complicit with the US war.

The remaining left Labour MPs were seen as old and tired by everyone, probably including themselves.

The activist left was mostly a young new generation, bred in the Labour youth movement relaunched after 1959. It recruited thousands of new people in 1968 and after, mostly from the universities.

The then-biggest component of the activist left, the Socialist Labour League, had made a wild sectarian swing out of the Labour Party after 1964-5, in response to limited witch-hunting, and was widely seen as hectoring and haughty.

What is now the SWP briefly had the leadership in the Labour youth movement after the SLL’s departure, but drifted out around 1968,without ever explicitly deciding to do so.

Militant, what is now the Socialist Party and Socialist Appeal, remained in the Labour Party, but was notoriously staid and undynamic.

None of these groups could get much leverage in the industrial movement, although the proto-SWP (urged on by the Workers’ Fight faction which had joined it in a unity move in December 1968) was starting to produce some workplace bulletins and establish some rank-and-file union networks which would later bear fruit.

Older Labour left activists disgusted with Wilson often quit the party, or at least stopped attending meetings, and instead found more interest in the campaigns and demonstrations animated by the extra-Labour left.

None of the gears of a potential revolutionisation of the labour movement sync’d. And thus we had a great labour upsurge which would end up forcing the Tories from office in 1974, but able to replace them by nothing better than another Wilson government.