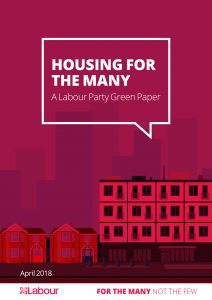 There is much that is good in the Labour Party Green Paper ″Housing for the many″:

• Scrapping plans to force councils to sell off the best of their homes.

• Ending the ″viability loophole″ which enables property developers to renege on housing commitments if they reduce profits.

• And most of all: launching ″the biggest council house building programme for over thirty years and get more than 100,000 new genuinely affordable homes built each year″.

However this very rapidly becomes watered down to: ″a Labour Government will build one million genuinely affordable homes over ten years, a majority of which will be for social rent.″ The whole emphasis throughout the document is not council but ″affordable″ housing, including housing association, private housing, local authority-business strategy partnerships and joint venture housing. (The Haringey Development Vehicle was a ″joint venture.″)

To deal with the housing crisis a minimum of 100,00 council homes need to be built every year. Council housing must be specified. It should not be blurred with ″social housing″ or ″affordable housing.″ In this the Green Paper fails decisively.

The greatest threat to ″social housing″ is the Tories Housing and Planning Act (2016) which seeks to end council housing, end security of tenure for council tenants, completely deregulate housing associations and fully turn them into private landlord companies, and severely curtail the planning powers of local authorities. We need a commitment to repeal the Act in its entirety. The Green Paper makes no such commitment.

The document fosters illusions in housing associations as part of the solution. Increasingly they are part of the problem. For twenty years they have been slowly but steadily changing into dual housing association-private landlord companies-private developers. The 2016 act deregulates them and completes the process.

The Tories say they belong in the private sector, they ″should not be charities.″ They are no longer housing associations except in name. They are now ″Private Registered Providers.″

Some housing associations are now selling off both individual properties and whole blocks to private landlords and speculators. The interests and wishes of tenants are ignored.

The quality of service they provide has deteriorated, rents are rising fast. service charges are being added or dramatically increased, often for services which are non -existent. Meanwhile housing association executives are giving themselves huge salary increases.

All this is ignored in the Green Paper.

There must be a commitment to re-regulate housing associations and return them to their original function of Registered Social Landlords. The Green Paper makes no such commitment.

It also makes no mention of the private rented sector, where tenants are ruthlessly exploited, have no security of tenure, and often live in appalling and unsafe conditions. Ever increasing numbers are in ″short term″ tenancies leading to constant stress, instability and continuous disruption of the children′s education.

Labour must commit to a Charter of Rights for private sector tenants which compels private landlords by law to maintain their properties to a decent standard, which guarantees tenants security of tenure, which replaces short term tenancies with long term tenancies and most of all which imposes strict rent controls. The Green Paper makes no such commitment.

On a whole range of issues the Green Paper is disappointing. Overall it is a half step in the right direction. Without a much bolder and more radical approach the housing crisis will continue to worsen.