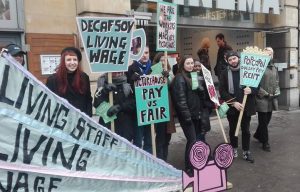 With the headline “Give Millennials £10,000 Each to Tackle Generation Gap, Says Thinktank” the Guardian (8 May) reported on the findings of the Intergenerational Commission, a grouping within the Resolution Foundation.

In fact there is a lot more in the report than a £10k “restricted-use asset endowment to all young adults to support skills, entrepreneurship, housing and pension saving”; but much of it isn’t good.

To meet social care costs for the elderly the report recommends “an increase in property-based private contributions towards care costs” with an “asset floor” ensuring that “no-one can be asked to contribute more than a quarter of their wealth for their own care” and a “£2.3 billion ‘NHS levy’ via National Insurance on the earnings of those above State Pension Age”.

The logic is one of individualised responsibility for care, rather than collective social responsibility. A similar logic can be seen in the ‘NHS levy’ on those working beyond pension age. At present the 10.4% of over-65s working in 2016 (1.19 million people) pay tax but no National Insurance. The report assures us that “four-fifths of revenues” would be “drawn from the richest fifth of pensioners”, but our bedrock demand should be taxation of the rich, not the elderly, to fund social care and the NHS.

For younger people the report recommends “boosting employment security via the right to a regular contract for those doing regular hours on a zero-hours contract; extended statutory rights for the self-employed; and minimum notice periods for shifts” and “innovations to support collective bargaining among young workers”, plus a £1 billion “Better Jobs Deal” and “£1.5 billion to tackle persistent underfunding of technical education routes”, funded by “cancelling 1p of the forthcoming corporation tax cut”.

The commissioners who produced the report include Frances O’Grady, General Secretary of the TUC – and Carolyn Fairbarin, Director General of the Confederation of British Industry (“the UK’s premier business organisation”), and David Willetts, the former Tory minister directly responsible for raising tuition fees.

Its picture of the present is more or less accurate.“Weak pay growth”has been “the dominant feature of [young adults’] working lives so far” and work has been “lower-paying and less secure”, but we are enjoying “record highs” in employment rates, and Britain has a “booming stock of wealth”.

New workplace rights should be overseen by inspectors, with trade union oversight.

Why limit ourselves to knocking 1p off a corporation tax cut? Roll back the whole mass of tax cuts the wealthy have enjoyed and use the money to fund training and other public services. The report is better on housing. The recommendations of “replacing council tax with a progressive property tax with surcharges on second and empty properties” and “community land auctions”, “stronger compulsory purchase powers” and “a £1.7 billion building precept allowing local authorities to raise funds for house building in their area” could help give councils greater freedom to build social housing.

The proposal that “indeterminate tenancies should be the sole form of private rental contract” is good. UK tenants can be evicted at very short notice, making revenge evictions and housing precarity ever more common.

A recommendation to limit “rent increases to inflation for three year periods” is also good, but we also need pay to catch up and beat inflation. A “new housing tribunal” to settle disputes could give tenants greater protections depending on the make-up of such a tribunal.

Generally, though, the individualistic approach of the report, focused largely on individual benefits, individual payments and individual responsibility amounting to an “intergenerational contract”, is embodied best by the £10k handout, supposed to give you an “individual opportunity” to become a small capitalist or get on the “housing ladder”.

Millennials won’t regain some of the security previous workers’ movements achieved through handouts or polite requests to meet intergenerational responsibilities, but through standing side-by-side with other workers of all generations fighting for political, social and workplace reforms, and beyond that by fighting against capitalism and forsocialism.