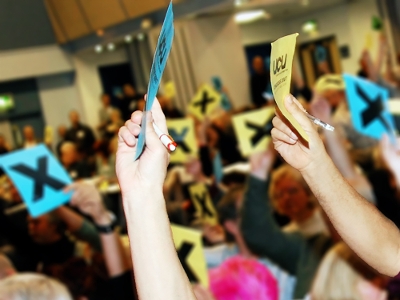 The following statement is being cirulated by Unite members. To add your name, please email nineteensixtyseven@gmail.com, including your branch and position if any. For the events of UCU Congress, see here.

“As Unite members, we express our solidarity with rank-and-file UCU members, after their union’s officials repeatedly shut down their congress to prevent discussion of motions critical of UCU General Secretary, Sally Hunt.

“These motions were submitted well in advance and had been accepted by the Conference Business Committee. No attempt was made to raise concerns before the congress.

“These actions constitute interference in the democratic processes of another union – something Unite would rightly not accept another union doing to it.

“It is the legitimate business of a trade union’s congress, the sovereign democratic decision-making body of the union, to both hold the General Secretary accountable and review the democratic structures of the union (including the role of full time officials). This is not a threat to the terms and conditions of union staff members.

“This is a matter of who controls the union: the officials or the membership? We support rank-and-file UCU members and the principle of member-led unions.”