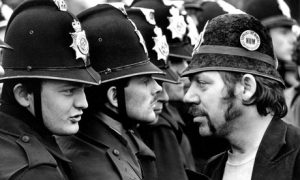 Would the kind of action British miners took in their great strike in 1984-5 remain illegal under a Corbyn government?

What about the struggles of the Great Unrest just before World War One, the 1926 General Strike, the Ford Dagenham women’s strike in 1968, the strikes to free jailed dockers in 1972, the 1976-8 Grunwick strike and the 2005 Gate Gourmet dispute?

Under a capitalist regime, almost any large or radical strike will run into legal barriers and state obstruction or repression. But since the numerous anti-union laws introduced by the Tories in the 80s and 90s, and kept in place under the last Labour government for 13 years, all these strikes involved forms of action that are straightforwardly, flatly illegal.

To take the example of the miners’ strike, from the start strikers violated Thatcher’s first anti-union Act, the 1980 Employment Act, which barred workers from picketing workplaces other than their own. Shortly after the strike began, the third Thatcherite anti-union law, the 1984 Trade Union Act, required ballots before all strikes – whereas miners had simply walked out, picketed out other miners and then taken decisions through their union’s delegate structures. Interestingly, although the strike faced all kinds of legal attacks, these acts were not used until after the miners had been defeated.

After that defeat, a torrent of anti-union Acts (see here) put in place restrictions which would have made it illegal many times over on many grounds. The last was in 1993, until the 2016 Trade Union Act added a new storey to the anti-worker legal structure.

And this is the rub: the 20 point plan for workers’ rights promoted by the Labour Party is welcome, but it looks very much as if it would leave virtually all of these laws suppressing strikes and workers’ action in place.

The party has campaigned to repeal the 2016 Act, but none of the other anti-union/strike laws. This is despite the unanimous vote at last year’s conference to repeal not just the Trade Union Act but also the “anti-union laws introduced in the 1980s and 90s”; and an earlier vote, also unanimous, at the 2015 conference, to legalise solidarity strikes.

The leadership, which shortly after Corbyn’s initial election, said some more radical things, has now merged into the “repeal [only] the Trade Union Act” line. They seem to be avoiding a straight answer on the rest – see for instance John McDonnell’s evasion in response a very clear question about this at a recent LRC conference.

During the general election, Labour’s election coordinator Andrew Gwynne told the Guardian that the party just wanted to return to the situation that existed in 2015 – and no one contradicted him.

Bizarre as it may sound, there seems to be a very real possibility a Corbyn government will do the same as Blair’s and Brown’s, and leave the big bulk of the anti-union laws in place (while of course being very different in many other ways, including on workers’ rights).

This is a fight to be had in the unions as well as the Labour Party. The party now has a left-wing leadership which was keen to, and did, include union demands in last year’s manifesto. It seems certain that most of the unions did not push for full repeal to be included, and perhaps even advised against it. Being able to tell members that the law prohibits effective action is often a comfortable let-out for cautious union leaders.

The point about the miners’ strike and all the other strikes cited above is that it is all very well to hark back to such things as wonderful episodes in our movement’s history, as many people frequently do. But if we are not willing to fight to scrap laws which make such things in theory impossible and in practice vastly more difficult – then we are not serious, and should shut up.

You might object that such struggles would not need to take place under a Corbyn government. Given the nature of capitalism and its state machine that seems overly optimistic, to put it mildly. In fact a Corbyn government may well, by raising expectations, make big workers’ struggles, coming into conflict with the powers and hierarchies of capitalism, more likely. In fact these struggles will be necessary to sustain a radical government, help it carry outs it program against resistance, and push it further.

Moreover, short of a workers’ government that provides the bridge to overthrowing capitalism, there is no guarantee that even a relatively successful Labour left government would not be replaced by the Tories at some point. (Would it really be successful, if it had not done things like scrap the anti-union laws?) What kind of legacy would leaving the anti-union laws in place, to be used by our enemies in the future, be?

Future mass workers’ struggles will face difficulties enough, even without the anti-union laws. Trade union and Labour activists should insist that Labour commits clearly to carrying out its conference policy to abolish them all and starts fighting vocally for that now.