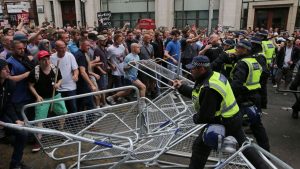 This motion is being proposed at Beeston Central and Rylands branch Labour Party, in Broxtowe CLP in Nottinghamshire, tonight (11 June), and also going to a number of other Labour Parties. Please use/adapt for your Labour Party.

There is a anti-fascist mobilisation, against the EDL and Tommy Robinson, on Saturday 14 July in London, so you might want to add in a call for the party and unions to mobilise then.

For a background article arguing for Labour and the unions to mobilise against the far right, see here.

We note:
1. The assassination of Jo Cox and the increase in hate crime post Brexit referendum are both long term indicators of a resurgence of fascism in Britain.
2. There were 10,000-15,000 racists demonstrating in London on 9th June. At that event there were speeches from a UKIP MEP, a Breitbart representative, the leader of the new Party ’For Britain’ and a fairly clear incitement of them to launch physical attacks by Geert Wilders that were followed by street battles around Whitehall with the police.
3. At its highest point during the rise of the far right in the late 1970’s, the NF were never able to mobilise more than a thousand.

This branch believes:
1. That anti-fascism and anti-racism is unfortunately currently seen as a fringe activity in the Labour movement. It has to be central.
2. The labour movement should take Cable Street in 1936 as our model. When violent racists and fascists gather together they should be physically blocked by massive outnumbering. The Labour Party has the numbers to do that.
3. We should take and explain anti-racist, pro-migrant and pro-refugee politics into the working class areas where these EDLers and UKIP are active.

We call on the CLP and others in this region to organize an inclusive meeting of all anti-racists and anti-fascists to act on such policies.

We also call on the NEC and national union bodies to mobilise significant numbers of members for anti-fascist protests rather than simply passively endorsing such protests.