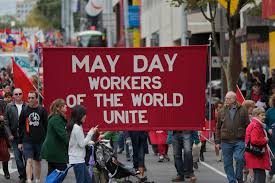 When May Day came around this year, I happened to be on holiday in Lisbon. I know Portugal fairly well but I’m not that familiar with the political scene, so I went along to the march hoping to pick up a few leaflets and see what’s going on. Quite accidentally I ended up picking up a lot more than that.

The march was organised by the CGTP, which is the larger, Communist Party-dominated trade union federation in Portugal, and it was very controlled. There was an almost total absence of home-made placards, all the banners and flags were official and professionally made, and there was a chant sheet from which nobody deviated even once. Most of the unions marched behind cars with huge loudspeakers on top, and people with wireless microphones walking alongside them led the chanting. Every now and again, those same loudspeakers would play the Internationale or Grândola Vila Morena and everyone would join in.

A few days later, I attended Edinburgh’s May Day march where most people didn’t chant at all and those that did were led by whoever happened to have a megaphone, who was typically making it up (badly) as they went along. A few people sang The Red Flag, but I suspect as a way of showing off they knew the words. We could clearly learn a thing or two.

It wasn’t all good in Lisbon though. Bafflingly, the chant which people joined in with most loudly was “CGTP – trade union unity”, a chant which somehow works better in English since it doesn’t even rhyme in Portuguese. As far as I can tell this refers to the other federation UGT, which split away in 1978 in the aftermath of the revolution. For some reason they organise a marathon on May Day morning, and not a march.

I marched in the youth section, known as Interjovem or ‘Interyouth’. This section is celebrated from the top, with a chant in their honour on the chant sheet (“it’s Inter, it’s youth, it’s Interyouth”) and their own branded flags, and we were welcomed enthusiastically by the top brass on stage when we entered the rally area.

During the march, Interjovem seemed to have minders. Three men who would have been at around the age limit for a youth section stood in front of the two banners. Two of them walked backwards with megaphones and led the chanting for the section (in unison with the section in front of us, another thing the left here could learn). The third one stalked to the left and to the right, keeping about a ten metre distance between us and the people in front, making sure the banners were in line with each other, swapping people out from holding the banner, and basically making sure we looked good, but watching us closely the entire way. At one point he ushered an older woman forward because she was walking too slowly and getting too close to us. Occasionally he would raise his fist in the air and everyone else would raise their fists. Occasionally he would start jumping in time with the chant and everyone else would start jumping. I felt under surveillance. It was like people couldn’t even be trusted to march.

One person had a recruiting sheet, but I didn’t see him talk to anybody. Another had a bag of what looked like leaflets but I didn’t see her give any out, even though the general public was cheering us on and even singing along with the Internationale! The purpose of this demonstration didn’t seem to be raising anybody’s consciousness or engaging anybody at all, just consolidating the group that already existed. There’s a place for that, especially on May Day, but I came away concerned at the culture of compliance and machismo which was evident.

Less than a week later, complaints started appearing about the May Day march in Glasgow. Young members had turned up to find that Scottish Young Labour had formed a joint ‘Red Bloc’ with the Young Communist League, and some were reportedly pushing people around to march in straight line formation with flags. Many members instead marched with other organisations they’re affiliated with. Out of those that stayed behind, women in particular were manhandled to the back of the bloc whilst men were photographed holding the banner at the front. Members had been asked to “dress appropriately” to “improve the sartorial elegance of the Left”. When women members complained about the way they’d been treated, anonymous troll accounts sprang up to hurl abuse at them on social media. It seemed they’d mimicked everything bad about my experience in Lisbon and cast aside everything good.

I find it difficult not to see political parallels. Within the Labour Party and particularly amongst its youth, some on the left have caught a whiff of political power and are now too willing to use the bureaucracy, notions of loyalty, and an in-crowd culture to control people. Worryingly, their path to socialism doesn’t involve convincing anybody of the virtues of our political ideas, or even necessarily adhering to those ideas as the Brexit debacle has shown us, and instead involves taking control of political structures and defending them at all cost through expulsions, alienation, backroom shenanigans and opportunism. That might be a way to gain temporary control of a shrinking party that slides to the right under pressure, but it’s no way to build an institution that challenges capital.