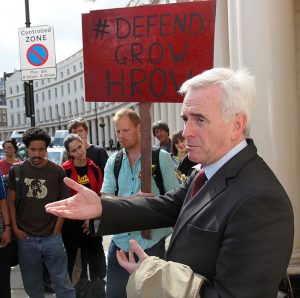 If Labour solidly opposes the government’s plans for a third runway at Heathrow, the Tories can be defeated.

Already 30 Tory MPs have said they will oppose the scheme, for their own mix of reasons of course. Unfortunately, Labour’s position is not yet clear.

Jeremy Corbyn and in particular John McDonnell, whose Hayes and Harlington constituency includes Heathrow, have a long record of opposing airport expansion. But the original decision to expand Heathrow was made under Gordon Brown – it didn’t happen because the Tories opposed it and cancelled the plans when they came to office!

Labour’s position has never formally changed and its public statements are now unclear, talking about expansion having to meet “four tests” on noise, air quality, climate change and economic growth. As with Brexit, the tests can function as a way of evading the issue. In addition the party indicates it does not oppose airport expansion in general.

However, John McDonnell has reaffirmed his position on Heathrow, saying this week tht he remains “implacably opposed” to this “costly environmental and social disaster”. As he put it in 2016: “I’ve campaigned against this runway for over 30 years and in that time Heathrow have never managed to win the argument for expansion which still remains the case today.

“Nothing has changed. Building a third runway would be devastating for local residents who face losing their homes, schools, community centre and village life. It also remains a disaster for air pollution, noise levels and our effort to tackle climate change.”

He has also flagged up the cost to taxpayers if a future government abandons the scheme. We must argue for airports and air travel to be taken into public ownership.

There are indications that the leadership wants to whip the PLP to oppose expansion, but there will undoubtedly be resistance from many Labour MPs.

Unite, the biggest union at Heathrow, supports the third runway for much the same reasons that it does not oppose nuclear weapons. It takes a politically-conservative position which is both wrong and not a good or effective way to fight for jobs.

We should oppose all new airport expansion. The advantages to working-class people of airport expansion (more cheap travel, new jobs) could be much better got by expanding and cheapening rail and coach travel.

What are the core reasons to oppose the third runway? As of 2008, almost a quarter of flights from Heathrow were to destinations less than 500km away, and already well-served by train. A 2013 report had similar findings: 20 to 25pc of flights to short-haul destinations. The government’s own estimates are that rail travel per passenger brings 10pc of the pollution of air travel.

There are longstanding concerns about noise and about air quality close to airports. However the biggest factor is the impact of aviation emissions on climate change. In response to a parliamentary question on 2 May 2007, aviation minister Gillian Merron said that aviation represented 6.3pc of UK emissions. However she added that if the effects of “radiative forcing” i.e. burning greenhouses gases at a higher altitude, are added, the figure for flights departing the UK would be approximately 13pc of total UK emissions.

According to the Tyndall Centre for Climate Change Research, international emissions from aviation went up by nearly 50pc between 1990 and 2000. It estimates that, including the effects of radiative forcing, aviation is on track to account for between 50 and 100pc of the UK total carbon budget by 2050.

The real driver for airport expansion is that it will benefit corporations in and around London. Future Heathrow says that 70pc of new businesses locating in the UK do so within one hour of Heathrow. Heathrow expansion is about meeting the “needs” of business people to fly directly to business nodes across the globe or to locations within the UK.

Let’s win our party to opposing the third runway at Heathrow, and defeat it!