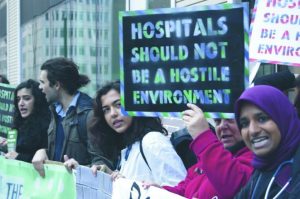 The growth of anti-migrant feeling and increasing racism can be tracked back to immigration policies brought in not by the Tories, but by Labour under Tony Blair. Of course racist attitudes were a problem before, but Labour’s strategy, instead of reducing the problem, inflamed it.

Far more than under the Tories, a central element of Labour’s immigration policy after 1997 was to transform agencies such as schools, universities, hospitals, Jobcentres and employers into an auxiliary Immigration Service, by requiring them to check the immigration status of their client groups and employees.

The home secretary responsible for the 2006 Immigration, Asylum and Nationality Act, John Reid, boasted about his plan to make life “constrained and uncomfortable” for illegal immigrants. Bosses would now have to check an employee’s papers at regular intervals to avoid employing an irregular worker. Most immigration documents are time limited. Yesterday’s lawful entrant can become tomorrow’s sans papiers.

Almost as soon as Labour came to office, in 1999, it introduced an Immigration and Asylum Act which dramatically limited asylum-seekers’ and other migrants’ access to benefits and services and introduced a policy of dispersing asylum-seekers around the country.

New Labour massively expanded the detention centre program including the opening of the notorious Yarl’s Wood.

In 2004,New Labour oversaw 1,098 “successful operations” (i.e.raids) against undocumented migrant workers, which saw the arrest of over 3,000 workers, but the prosecution of only eight of the employers responsible for exploiting them.

In 2003, only one boss was successfully prosecuted,while 1,779 workers were arrested and removed from the workplace (and presumably deported). Even laws which were motivated as improving conditions for migrant workers — such as the Gangmasters Licensing Act of 2004 — were used for further crackdowns against undocumented workers.

Labour’s 2004 Asylum and Immigration Act made the meagre housing and social support to which most refugees were entitled conditional on their performing unpaid “community service”; which reduced the legal status of many migrant workers, asylum seekers, and refugees to something akin to slaves.

Britain’s current points-based immigration system, which allows entry for “entrepreneurs” with £200,000 or more, or employees with high qualifications and “future expected earnings”, but excludes ordinary workers, was introduced not by the Tories, but by Labour in 2008.

Measures like these were adopted while at the same time New Labour was welcoming migrants from across Europe as the business demand for labour was high. Thus, visible scapegoats: the bad illegal (often brown skinned) immigrants versus the acceptable European worker. Even then, workers from EU East European states are restricted in obtaining benefits and are bound by employment restrictions such as the need to register for work with the Home Office, a requirement which in itself may drive such workers into the underground economy.

Special treatment of East Europeans created a racist backlash, and research by the Institute of Race Relations has shown a particular and ongoing increase in violence against Eastern European migrant workers.

Immigration controls always have their latest demons. Today it is “economic migrants” – whose labour is needed but whose presence is unwanted.

In the 1970s and 1980s it was husbands from the Indian sub-continent who were accused of contracting “marriages of convenience” – along with children seeking to join parents here – and were accused of “not being genuine as claimed”. In the late 1960s it was Asians from East Africa… in the 1920s, comnmunists; at the turn of the 20th century, Jews fleeing Tsarism (leading to the first controls – the 1905 Aliens Act).

Unemployment, lack of housing, and the decay of public services are caused by the people who created the financial crisis – bankers, big business and the politicians who are battering our living standards. British working-class people cannot fight effectively for their own interests without standing in solidarity with our brothers and sisters who come here to flee persecution or build a better life.