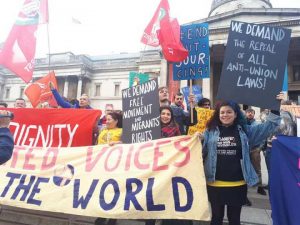 The following motion, closely modelled on the statement initiated by Lambeth Unison which The Clarion has been promoting, has been submitted to Unite the Union’s policy conference (2-6 July, Brighton).

For the whole motions document, see here. The union rights section begins on p83 and this motion is on p84-5.

The other motions in this area contain much that is valuable, but the formulations on repealing all the anti-union laws and legislating for strong rights to strike, picket, etc, are much sharper and stronger in this motion.

It is great the statement has gone forward to the conference; we will update on progress. For wider campaigning on this and how you can help, plus articles, resources, etc, see here.

A Corbyn government must free our unions

We need abolition of the anti-trade union laws, which hamstring workers organising and taking action, and their replacement with strong legal workers’ rights.

We applaud the 2017 Labour Party conference’s unanimous call for repeal of not just the 2016 Trade Union Act, but also the “anti-union laws introduced in the 1980s and 90s” by the Tories and maintained after 1997; and for a “strong legal charter of workers’ rights”. “For unions to be effective workers need an effective right to strike”.

This builds on the unanimous 2015 decision that the next Labour government should “legislate for strong rights to unionise, win recognition and collective bargaining, strike, picket and take solidarity action”.

We will campaign for:

• Complete and speedy repeal of all anti-union laws.
• Strong legal rights for workers to join, recruit to and be represented by a union; strike/take industrial action by a process, at a time and for demands of their own choosing, including in solidarity with any other workers and for broader social and political goals; and picket freely.
• The right to reinstatement for workers found to have been sacked unfairly. A complete ban on dismissal for industrial action, however long it lasts. Full rights from day one of a job.
• Strong rights for unions to access workplaces, win recognition, and establish collective bargaining, including sector-wide bargaining.
• Unions’ right to decide their own policies and activities, determine their own structures and rules, and spend their funds as they choose, free from state and employer interference, in line with ILO Conventions and the European Convention on Human Rights.