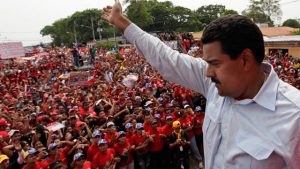 On 20 May, Nicolás Maduro won the Venezuelan presidential election on 67% of the vote. While this places Maduro comfortably ahead of nearest rival Henri Falcón’s 21%, electoral turnout was below 50%. Since 2013, Maduro has been the successor to Hugo Chávez’s so-called ‘Bolivarian Revolution’. While Maduro’s re-election is already being celebrated by much of the international left, British socialists should refrain from casting this result as a victory for the working class.

Recent years have seen Venezuela rocked by economic turmoil, civil unrest, and constitutional crisis. In March 2017, the Supreme Tribunal of Justice assumed the legislative functions of the National Assembly, controlled by the right-wing opposition coalition Democratic Unity Roundtable (MUD). Maduro broke the institutional deadlock by convening a National Constituent Assembly to draft a new constitution, effectively creating a parallel legislature. The National Constituent Assembly elections in July 2017 saw Maduro’s party, the United Socialist Party of Venezuela (PSUV), and its allies win an enormous majority, but since the opposition refused to participate, these seats were largely won by default.

As a Venezuelan socialist active on the British left, I have spent years enduring rampant apologism for Chavismo. This generally stems from an uncritical acceptance of the Chavista movement’s claims to be building a mass-democratic, socialist project, and of Chávez and Maduro’s posturing as ‘anti-imperialist’ champions. In reality, Chavismo has always been more akin to Bonapartism: an authoritarian populism born of an uneasy alliance between the military and sections of the labour movement, with the former used to administer and stabilise the state.

Over the years, the Chávez and Maduro regimes have strangled trade union autonomy. This is clear from such repressive measures as the Venezuelan National Guard’s 2008 attack on thousands of striking steel workers at the SIDOR factory in Ciudad Guayana and the 2009 sentencing of union organiser Ruben Gonzalez to seven years in prison for striking over unpaid wages at the state iron ore company Ferrominera Orinoco. The PSUV itself is a sprawling, top-down bureaucracy, unaccountable to the very workers it claims to represent.

Despite the Chavista rhetoric of ‘21st century socialism’, most of the Venezuelan economy remains in private hands and those sections of the industry under state control have nothing resembling workers’ democratic control. Indeed, groups such as Businessmen for Venezuela (‘EMPREVEN’) were formed to ally sections of the national bourgeoisie with the ‘Bolivarian Revolution’ and Maduro now risks ecological ruin by inviting transnational companies to mine in the Arco Minero area of Venezuela’s Amazon region.

We should be under no illusions about the reactionary nature of the MUD. A victory by forces backed by the US government would be a disaster for Venezuela’s political independence. Nevertheless, the emancipation of the Venezuelan working class can only come through an independent workers’ party, and we can only begin to build such a party by admitting uncomfortable truths about Maduro and the PSUV.