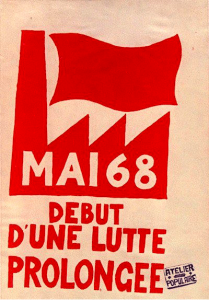 May 1968 has become a symbol, its force neutered by remodelling it as cathartic fantasy. When Gucci releases a fashion collection supposedly inspired by 1968, the message to the world is that 1968 is safe to touch, we’ll never witness it in real time anyway.

Yet for us, May 1968 represents the moment of exhilaration upon realising: this world is not inevitable. In January 1968, France had the highest level of unemployment it had witnessed in fifteen years. Prices were rising, whilst wages stagnated. There were severe housing shortages. Meanwhile students had led sustained mobilisations against the Vietnam war.

Dissatisfaction over university reforms led to students occupying a university administration building in Nanterre on Sunday 5 May. The police were called and the university was shut down. Protests escalated and on 7 May, there was a march of 50,000 people against police brutality.

On 13 May, a one day general strike was called by the CGT, the major French trade union federation. By Monday 20 May, two thirds of the French workforce, or ten million workers, were on strike, putting forward demands that were far more assertive than what the union leaderships were comfortable with.

The Grenelle agreements between the government and union leaders and employers on 26 May offered an increase of 35% in the minimum wage, but the general strike continued. On 27 May, George Seguy and Benoit Frachon, veteran leaders of the CGT, stood before an assembly of five or six thousand workers in their bastion, Renault Billancourt, in an effort to convince them of the merits of the Grenelle agreement. Unsuccessfully.

The movement was critically endangered by, and ultimately defeated, by the actions of those who claimed to be the labour movement’s leadership, the Communist Party and the CGT. In 1968, one quarter of the French voting population voted for the Communist Party, which counted 300,000 members in its ranks.

At every turn, the leaders pushed for mediation rather than escalation. Communist Party officials manipulated striking workers to return to work, for example, by going round Metro stations stating that the other stations had already opened. As the police began to break up strikes by brute force in the post, radio and fuel industries, the Communist Party stood on the sidelines and let it happen.

Far left groups were officially banned by the government as the strikes faded in June, and some leaders jailed, but the Communist Party remained silent, focusing on the elections. The role of the Communist Party became to cry out “Order prevails in Paris!” whilst workers were violently ousted from occupied factories by the police.

The strength of May 1968 lies in scintillating display of force by workers: it gained its spectacular power when the movement left the universities and entered the streets and picket lines.

It is comforting to characterise May 1968 as a “youth revolt”, because bosses can reassure themselves that we’ll grow out of it. Unfortunately for the bosses, the labour movement doesn’t grow out of its efforts to fight for a better world, but rather grows up through them. And it grows up to learn to trust in its own force, not this or that leader.