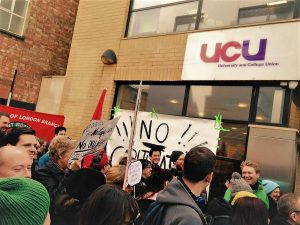 Further to the preview of the University and College Union Congress by Rhian Keyse we carried on Wednesday, we republish this statement from Thursday by Rhian and the other two Exeter UCU delegates, which explains the dramatic events that have been taking place there.

We are deeply troubled by widely-reported events that took place today at UCU Congress. As Exeter’s Congress delegates, in common with delegates from branches across the country, we attended Congress to represent our members both through contributions to debates, and to move a motion democratically voted by our members at a quorate general meeting last month. This motion proposed a vote of no confidence in the UCU General Secretary Sally Hunt.

In the days leading up to the Congress, we came under pressure as delegates from a range of sources within the union to withdraw this motion. We came under further pressure overnight into this morning, and we arrived at Congress to learn that UCU national officials, members of the Unite trade union, had elected to stage walkouts in the event that our motion and two other motions referring to democratic processes and governance were retained in the Congress agenda for discussion.

These walkouts represented a de facto attempt to derail the Congress, as it was the view of the chair that Congress could not continue in the absence of the UCU national officials.

Despite the significant pressure under which we were placed, we did not consider withdrawing the motion. It had been democratically voted by our Branch as per union rules, ordered onto the agenda by the Congress Business Committee, and as such we had no mandate to unilaterally reverse the decision of our members.

Nevertheless, in the spirit of trade union solidarity, we agreed to meet with our colleagues in Unite for discussions as the Congress was suspended following their first walkout. Their view, expressed to us, was that Congress should not debate censure motions or votes of no confidence relating to the General Secretary (a Unite member herself) as this would threaten her status as an employee of the union.

We pointed out that in practice this meant that members of the Unite union are able to exercise a veto on the topics which UCU members can discuss at their annual Congress. We further pointed out that this was clear interference in the internal business of a sister trade union, and a potential breach of TUC rules. Furthermore, we disputed their interpretation of the General Secretary’s status as an employee, highlighting that she is the most high-profile elected official in the union, and as such must be accountable to Congress, the union’s supreme policy making body.

Though we could not agree to withdraw the motion, as an act of good faith, along with our colleagues from King’s College London who had tabled a censure motion, we offered to allow our motion to be taken ‘in parts’; effectively allowing a vote on each individual aspect of the motion. This was refused as unsatisfactory by UCU national officials acting as Unite members. The only outcome which would be satisfactory would be the withdrawal of the motions so they would not even be discussed.

This we could not agree to.

Congress resumed, and the chair read a statement from the Unite members (of which we had not been informed previously, and to which we were given no right of reply) stating that they had been unable to reach an agreement with us.

As has been reported in the press, our motion – following an intervention from the National Executive Committee asking that it be withdrawn – was voted to be heard by the assembled Congress delegates. At this point national officials, including the General Secretary, staged a second walkout, and following a further suspension of Congress, business was terminated early as no agreement could be reached. At this point, UCU national officials, acting as Unite members, declared themselves to be in formal trade dispute with UCU.

We would never traduce the right of any trade unionist to represent their members. However, the reality of the situation here is that the actions of UCU national officials, acting as Unite members, derailed the supreme policymaking body of a sister union.

We believe that democracy and accountability are always vital in trade unionism, and never more so than now, when UCU has been revitalised in the course of the USS dispute and the FE Fights Back campaigns. We believe that the motions which should have been debated today represented an opportunity to chart a new way forwards for the union, one which maximises the voice of members.

We remain committed to representing our members at Congress, and to open and comradely debate and disagreement. A shared commitment to democracy, and creating the spaces where we are free to disagree as fellow trade unionists, is the essence of what unites us as a trade union.

We look forward to the opportunity to resume Congress business as soon as possible.