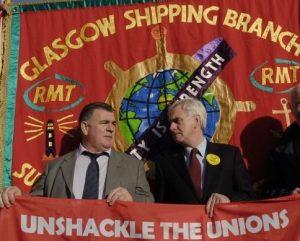 • Note: the SGM voted 31-25 against reaffiliation, while calling for closer links with Labour short of that. More soon.

By an RMT activist

On 30 May, the RMT rail and transport union will hold its Special General Meeting in Doncaster to debate whether it should reaffiliate to Labour, the party the union helped found but from which it was expelled in 2004.

A period of consultation within the union has revealed a fairly even split. A slight majority of branches and Regional Councils that held meetings to debate the issue voted in favour of reaffiliation, but those voting against represent a slightly larger proportion of the membership.

The support of all three national officers for reaffiliation (General Secretary Mick Cash and the two Assistant General Secretsries, Mick Lynch and Steve Hedley) has led some in the anti-reaffiliation camp to characterise the drive as a top-down one that the bureaucracy is attempting to impose against the wishes of the members.

However, the reality was that some branch and Regional Council meetings that took positions on the question, on both sides, were attended by less than 0.5% of their memberships. In such circumstances, neither side can claim a rank-and-file groundswell for their position nor that their strategy represents the overwhelming will of the members. Whatever the outcome on 30 May, socialists and rank-and-file activists in the union will have much work to do to improve grassroots engagement.

The anti-reaffiliation case was presented as a campaign to defend the union’s existing political strategy. In truth this is no coherent strategy at all, but a pick-and-mix approach that has seen the union donate some money to various Trade Union and Socialist Coalition (TUSC) candidates (never really a viable project and now nothing more than an electoral front for the Socialist Party), the odd Green, and a few independents, but has not contributed in any way to the building of permanent structures that might provide any serious or ongoing working-class political representation.

On the pro-affiliation side, some, including prominent Stalinists, have mobilised primarily bureaucratic arguments, emphasising the “influence” RMT might be able to have within Labour, mainly via possible seats on various committees. This is hardly an enthusing, rank-and-file case for reaffiliation.

Against both the incoherence of the anti-reaffiliation camp and the machine-politics, influence-peddling of some on the pro side, others of us have presented a case for affiliation based on the possibility of RMT mobilising its grassroots membership to intervene in transformative struggle at grassroots level in Labour.

If the union votes to reaffiliate, we will continue to make that case, and to argue for a genuinely democratic Labour link, responsive to control and pressure from below, rather than the ossified bureaucratic structure that Labour affiliation sometimes is in other unions. If the vote is against affiliation, we will continue to argue for a coherent political strategy, and for RMT members who do recognise the importance of involvement in Labour to coordinate to promote socialist policies and strike support within the party.

And whichever the vote goes, socialists on both sides of the debate must work together to renew rank-and-file engagement and reinvigorate the union’s democratic culture.