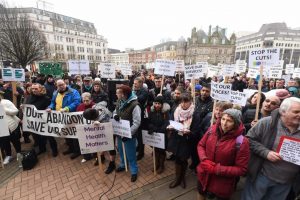 What is Labour’s policy on local government? It’s hard to tell.

The problem exists from “two sides”. On one hand, in the recent local elections, it wasn’t clear what Labour councils or potential Labour councils were arguing for beyond the Tories’ policy of cuts and austerity being bad. (Which, to be sure, is better than they might have argued pre-Corbyn.) Beyond saying that it wasn’t clear what they would do all that differently from displaced Tory councillors.

There seems to be some awareness of that problem in the upper echelons of the Labour left. We are hearing arguments that Labour has to make a “different offer” and take a more “radical approach” in local government – for instance in recent articles in the Guardian by Faiza Shaheen of the Unite-funded CLASS think tank (here) and Beth Foster-Ogg of Momentum (here). I had a similar argument made to me by a fairly senior left Labour Party national official after a meeting recently. We can’t just wait for a Corbyn government he said; we need to do things differently now.

Various councils are being cited as models – Preston, Salford and Islington are the main ones. No doubt some of what these authorities are doing is much preferable to the ultra-Blairite, aggressively neo-liberal model of, say, Lambeth or pre-HDV revolt Haringey; some of it looks good.

We may doubt how ambitious the ‘left’ Labour councils are actual being. We may also doubt how pushy and daring the official left is being: at the recent “Reimagining local government” conference, organised by London Momentum groups, several council candidates said that the training organised by the Momentum office was narrowly technical and didn’t raise political strategy. I have heard cases of Momentum office-loyalists discouraging pressure on councillors even on quite ‘easy’ issues like academisation.

If that’s changing, good. For sure there are things Labour councils could quite easily do differently: for instance opposing rather than promoting academisation; fighting to stop outsourcing and start insourcing services; and exercising a minimally critical attitude to property developers.

This is how the problem exists from the “other side”. It’s not clear, at all, what a Corbyn government would do to address this dire situation. Would it restore the funding, or not? How much, how quickly?

Last year’s general election manifesto implied more funding for councils in various areas of work, but only implied it; and it also included policies that would increase costs for councils. The “Funding Britain’s Future” paper linked to the manifesto (here) said only that Labour would have given councils an extra £1.5 billion this year. Councils have lost something like five times that amount since 2010. Then they got almost £18 billion in central funding; by 2020 it will be about £2 billion.

Beyond that the paper promised a “review into reforming council tax and business rates and consider new options, such as a land value tax, to ensure local government has sustainable funding for the long term”. But the Tories, too, are talking about councils keeping more money from eg business rates. That is not a left-wing policy: it means poor areas struggling with higher demand for services and a lower tax base while rich areas have a bigger tax base but lower demand. That is precisely what the post-First World War Poplar revolt was about: a demand for more central government funding to level the playing field for councils in poor areas.

During the local elections, the Guardian reported Labour’s campaign coordinated Andrew Gwynne making “it clear that Labour would not reverse the much-criticised cuts to local government funding” (see here). Gwynne “said that money would be committed to areas such as children’s services and adult social care”, i.e. the main things councils still provide in a stripped-to-the-bone regime.

So we face a situation where, in so far as it is saying anything, Labour is saying that it will not go anywhere near restoring cuts to local government funding. Certainly is not campaigning for that demand. The problem with the arguments about Labour councils doing things differently is that, consciously and deliberately or not, they are being used to justify not challenging that. “Money’s tight – but Labour can still shine in local government”, writes Faiza Shaheen, while Beth Foster-Ogg goes even further and says that Labour councils can “build socialism from below”!

As The Clarion has argued repeatedly since our first issue, we need a campaign to restore all the funding councils have lost since 2010 – a real campaign in which Labour pledges clearly to do it, argues vocally for it and mobilises around the demand. Without that, “different offers” and “radical approaches”, even where they have some real content, amount to dressing up capitulation.