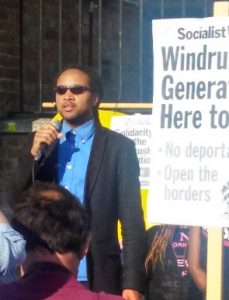 In 1948 the “Windrush Generation” were invited by the British Government to the United Kingdom to fill the labour gaps in the UK to rebuild the country.

These people entered the UK legally and as British subjects, but some have later been classified by this government’s hostile immigration policy as being illegal immigrants. Changes to immigration policy have led to hundreds of thousands losing their British citizenship and being demoted to ‘leave to remain’. Was it a coincidence that landing card records were destroyed?

The Windrush generation are descendants of enslaved Africans, who toiled in bondage in the Caribbean. They have been betrayed by the same British Empire whose wealth is built on the proceeds of the transatlantic slave trade which financed its industrial revolution.It took 400 years for emancipation. Those enslaved received not a penny in compensation for their brutal treatment! Is it a coincidence that the British slave masters were compensated very generously by their government?

Fast forward to 2018, is this a coincidence or history repeating?

They have been used, abused and undervalued. Our men and women have contributed positively to the enrichment of British society. Despite the constant challenges and barrier of racism our people have excelled in all walks of life employment, culture, sports entertainment, business.

But when you look at poverty, poor health, poor housing, education failure, the criminal justice system we are over represented there; another element of racism is at play here.

What the government immigration policy has done is inexcusable, unfair, wrong and dishonest, undemocratic and racist. For those who have been affected by imprisonment, deportation, loss of employment denied health care, denied pensions….we demand financial restoration! Those who have been deported to be returned to these shores speedily and each receive an official letter of apology from the government.

We demand open and transparent action to right this wrong.