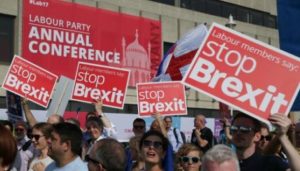 By Michael Chessum, Another Europe is Possible

Once again, the left finds itself in the awkward position of cheering on the House of Lords.

While Theresa May might have a majority in the House of Commons, propped up by the DUP , she has no such luck in the Upper House. This month witnessed a large scale move against the government’s EU Withdrawal Bill, with peers demanding a customs union, the maintenance of the Charter of Fundamental Rights, the ability to extend Article 50, and various procedural limits on the power of the executive.

Most controversially, a large scale rebellion among Labour Lords — who were whipped to abstain — pushed through an amendment for Britain to remain in the European Economic Area (EEA). When the Bill returns to the Commons in late May and beyond, MPs will have the ability to bind May into signing a Norway-style deal. The Labour Leadership is adamant, however, that it will not back the amendment — largely because it would lead a post-Brexit UK to following pretty much all of the rules of the EU without having a say in making them.

I think the Labour leadership is wrong not to support the amendment — here’s why.

Firstly, a Norway-style deal is a much, much better outcome than what May is likely to negotiate in terms of progressive regulation. EEA membership would mean keeping all of the workers’ rights, environmental protections and free movement of people that we currently have. Yes, it would mean Britain being subject to state aid rules without having a say in the decision-making processes that form them, but these state aid rules would not prevent any part of Labour’s 2017 manifesto – and under May’s hard Brexit, we are likely to be bound into even worse liberalisation rules via bilateral trade agreements.

Secondly, as socialists we shouldn’t just do “what is good for the economy and growth” — growth in whose interest? — but we do need to get real about the impact that hard Brexit would have. The economy is set to be tanking by the time we form a government in 2022. Socialist policies absolutely can be enacted with diminishing overall resources – but under these circumstances they require sharp confrontation, and an unprecedented politics of expropriation and redistribution. Are we confident of Labour’s willingness to really ‘go for it’ in these circumstances? Or will we tear ourselves apart and implement a form of austerity?

Thirdly, there are precious few parliamentary hooks that could really scupper May’s Brexit agenda. If this amendment passes, it would push the government into crisis, and could bring it down. That could well force chaos and then an election, or even put Rees Mogg into Number 10. In any case, Labour’s electoral prospects would look much better.

The critical thing that the Labour left must realise is this: Labour isn’t going to be negotiating Brexit. The only post-Brexit reality we are going to get is a Tory one. And our only hope of stopping that agenda is to derail the entire thing.

Matt Wrack, FBU General Secretary:
“I would put the case forcefully that the stagnation of wages was not down to migration; stagnation of wages has always been a feature in this economy we live with, it has ups and downs and when there’s downs wages get suppressed, regardless of whether you have immigration or not.
“Obviously blaming immigration, as a section of the left seem to do and a section of the trade union movement seem to do, making that a focus of your analysis – well, clearly migration can have some impact on wage levels, but the evidence doesn’t suggest that’s huge. You’ve got to think about the political implications of that which are utterly divisive.
“What we haven’t done sufficiently is taking up the logic of the people arguing that case sufficiently. We need to take it on in a lot more detail. It goes back to basic question of how the economy works. We should oppose the attacks on free movement. That needs to be done in a dialogue with workers. Migrants do tend to end up in the poorer communities, so how do we address that?
“The truth is it’s always been the same; migrants have come into the East End of London or whatever, and those have always been the poorer communities. How do turn that around? What’s missing is a positive fight for decent housing, decent resources, decent community facilities, which I think could cut across a lot of these issues.”

Manuel Cortes, TSSA General Secretary:
“I think Labour should be saying very clearly that we are in favour of the continuation of free movement whatever happens with Brexit. At the moment I don’t think we are being clear enough and different people have had different interpretations of what the Labour position is.
“The Jeremy Corbyn I know has always been in favour of migrant rights and I really cannot see how Jeremy Corbyn as prime minister would do anything than ensure people retain all the rights they have already got.
“My position and that of my union is very clear that the freedom of movement currently enjoyed by people of 32 countries, including our own, should continue. Should continue regardless of Brexit. We hope over the years that freedom of movement will be expanded to include countries that are not currently within the European economic area.”