In recent interviews with The Clarion, two leading labour movement activists, FBU General Secretary Matt Wrack and McStrike organiser Shen Batmaz, spoke about why the demand to repeal the anti-union laws is so important. For our campaigning on this demand and what you can do to make it happen, see here.

“We need to say there is far too much state interference in the running of trade unions, and that should be completely rolled back. State interference in the voluntary organisations of workers – we should have a principled objection to that. Our starting point has to be, we don’t support anti-union laws – full stop. We want to discuss how we get rid of them. If other people have a different point of view, let’s have that debate. We need to discuss how we get this into the manifesto and how do we make sure we get a Parliamentary Labour Party that will all vote for it when it comes up. The unions have to be clear what the unions want. If we look at the Blair-Brown years, the question has to be asked why did Labour-affiliated unions allow 13 years of Labour government to go through and not see the repeal of those laws, because it’s put us in a much weaker position as a trade union movement.” 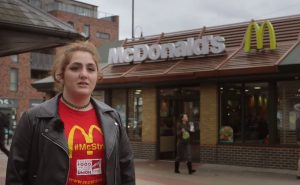 “The balloting process is deliberately made long and difficult, to stop people from taking action. For people who’ve not been involved in organising before, that process can be scary. Just the fact that the employer has been given notice can make you nervous. What we’ve lost is the days when you were able to sit in a room with your friends from work and raise your hand and there was that moment of comradeship. Instead people are stuck at home with their ballot, on their own, and second guess and psych themselves out. The ban on flying pickets is important too – we would have liked to go to other stores, to show them what we were doing and give their confidence a boost, but of course we couldn’t. These laws were put there to stop workers demanding their rights, so we absolutely need to fight them! While they remain, workers’ rights will continually be taken away and people will remain scared of fighting for them. The whole labour movement should campaign for them to be repealed, including the Labour Party. If they’re repealed we’ll have a much better chance of protecting ourselves and fighting to win.”