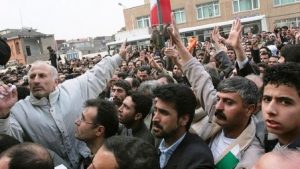 On 8 May Donald Trump finally withdrew the US from the Joint Comprehensive Plan of Action (JCPOA).

The JCPOA, or Iran nuclear deal, was the Obama administration’s top foreign policy achievement and has been consistently condemned by Trump during the 2016 election campaign and ever since.

To justify America opting out of an international law endorsed the UN Security Council, Trump made a speech filled with lies and half-lies. The main lie was that the Iranian regime is not compliant with the JCPOA. In fact the UN’s International Atomic Energy Agency has repeatedly said that the Iranian regime is in compliance with the deal. In fact it is US imperialism that has not fulfilled commitments like easing sanctions, especially banking restrictions.

To many Trump’s speech sounded like comments by George W Bush before the Iraq war. Given the general economic problems of American capitalism and the political crisis of this presidency, Trump’s move does not mean that the US is preparing to invade Iran. It is aimed at extracting concessions from the Iranian regime. This strategy may involve some clashes between the US (and its regional allies like Israel and Saudi Arabia) and the Iranian regime and its proxies, as has already happened in the Golan Heights.

All other signatories are still committed to the deal. Britain, France and Germany all lobbied hard to dissuade Trump. Russia and China, both with a UN Security Council veto, have always supported the deal. Since the JCPOA is vital to preventing Iran’s dire economic situation becoming even worse, President Hassan Rohani has said that the regime will remain in the deal and will be working European powers to continue it.

Socialists should never forget that this regime was established after the Hezbollahi crushed the independent and radical mass movements: the workers’ factory committees, the women’s movement, the students, the national minorities and so on. And ever since it has been in power this regime has exploited and oppressed workers even more than the Shah’s dictatorship.

The past two years have seen an upsurge in the Iranian workers’ movement, with many radical struggles. These include the Haft Tappeh Sugar Cane workers who in January 2018 threatened to take over the running of the company from their incompetent management. Esmail Bakhshi, a workers’ representative, said: “… we have the expertise to produce sugar, so we’ll manage it ourselves”. On 10 May, there was a peaceful country-wide protest by teachers and retired teachers demanding more funds for education, higher wages and an end to privatisation. The protest in Tehran was violently broken up and many teachers and activists arrested.

There are many workers’ struggles taking place in Iran every week over very basic demands such as the payment of unpaid wages. The regime’s response to the workers’ demands has always been massive repression, including jailing numerous activists, flogging workers and many other brutalities.

Pushing – in our unions, in the Labour Party, in youth movements – for solidarity with the struggles of Iran’s workers, women, national minorities and students must be the main task of all those who are concerned with Trump’s move and want to help overturn the right-wing shift in politics around the world. Socialists should in no way support Iran’s brutal capitalist dictatorship.

• For more information about Iranian workers’ struggles and how to build solidarity, visit the website of the Shahrokh Zamani Action Campaign, named after the Iranian workers’ leader murdered in 2015, at shahrokhzamani.com, or email shahrokhlives@gmail.com