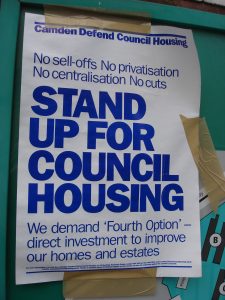 Around 100 people attended the London Momentum conference, “Reimagining Local Government: London for the many not the few” on 24 March. The meeting started with rousing speeches from John Burgess (Barnet Unison) and Sahaya James, from an occupation against the University of the Arts London’s gentrification plans.

The conference was an excellent forum for Labour left activists from across London to discuss strategies for the elections on 3 May, and what socialists can do as councillors. It was good to have already sitting Labour councillors attend to give their voice and expertise. Laura Parker, National Coordinator of Momentum, attended to give a talk on coordinating left councillors which was well received and showed an openness from Momentum to engage with events by their members that they don’t control.

But it wasn’t just about council elections, it was also a chance to hear from activists on the ground engaged in anti cuts and housing campaigns. One workshop, led by activists from Lambeth, examined the tactics around campaigning in Labour controlled boroughs where the councillors have been viciously opposed to anti cuts campaigns — for instance in Lambeth over libraries. The left were completely carved out of the selection process for candidates which forced the local left to focus on the kind of policies they would like to see Labour stand on.

We also heard from Pamela Fitzpatrick who gave a great speech on her time on Harrow Council and the battle for selection as the PPC for Harrow East. John Dunn, surcharged Clay Cross councillor, gave a rousing speech about the importance of sticking to working-class principles in the face of a vicious Tory government. There is space for Momentum groups to come together and coordinate in a way that Momentum’s HQ currently isn’t facillitating. Clearly the scale of the task facing the left in local government will grow enormously after 3 May, but people want to have those conversations and get organised now.