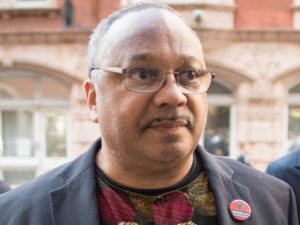 Clive Lewis MP gave us his personal take on the expulsion of Marc Wadsworth.

I think the expulsion of Marc Wadsworth was the wrong decision. Obviously there will be some members who are happy with it but there are many more members that I’ve come across who feel deeply disappointed and angry at what happened.

Someone who was trying to justify what happened said to me that there had to be an example made of someone and I think in many ways it looks like they are saying ‘well, look, we don’t have the culprits here, but we will make an example of this person’. That’s the completely wrong approach, that’s not justice, that’s retribution and its wrong.

There has been a history of tension between some parts of the black community and the Jewish community and it took a lot of work to build bridges and this kind of incident can, I think, undermine a lot of that progress that has been made. Because it does look like someone has wrongfully been expelled from the party for, basically, heckling. You know we can say all kinds of things about what he said and who he said it to and I could think of a range of options, short of expulsion, which would have been far more suitable. I think in my CLP, if we were expelling people for what he did, I would have a lot of expulsions!

One of the things that many people in the Labour Party have come to understand about anti-semitism on the left is that antisemitism isn’t just about outspoken hatred of Jewish people. It can be a lot more subtle. It’s a lot more complex and it can come in many forms and that’s something I think increasingly people are beginning to understand, that there are subtleties, just as there are subtle forms of sexism, homophobia and racism. There are definitely some subtle elements of racism in some of the overtones of the allegations against Marc Wadsworth.

When I first gave the statement of support for Marc, I watched the video over and over and I have been criticised because people have said who are you to determine what is antisemitic and what is not. That’s a very valid question. But I look back to the Macpherson report, which I think was a benchmark in anti-racism in this country. It’s quite clear, but some people misinterpret what it says. I think Ian Austin, in his article for the New Statesman, misinterpreted the Macpherson report as saying that if a Jewish person reports racism that the accusation itself is the evidence. That’s a dangerous path to go down.

Ultimately what Macpherson said is that if people make an allegation of racism, it should be taken seriously. I think the Marc Wadsworth incident was taken seriously. Clearly when the party looked at it, after two years of his name being dragged through the mud, as a de facto anti-semite, the antisemitism allegations were dropped. I think anyone who looked at that could see that those comments were not antisemitic. It might have been offensive, it might have been poorly judged, it might have been stupid, but it wasn’t antisemitic He has ended up being expelled for bringing the party into disrepute and not for antisemitism.

So I think when people look at this, look at the facts, look at how he has been treated, it creates a lot on anger at the injustice. I think ultimately that can have a negative impact on this whole debate and discussion about antisemitism in the party and on relations between the black community and the Jewish community. It shouldn’t! But I can see how some people get angry.

This is a time when we reach out and say mistakes were made, work out how we can make sure it doesn’t happen again and that wrongs are righted so both communities feel this is a party which is a safe space and where they are welcome.