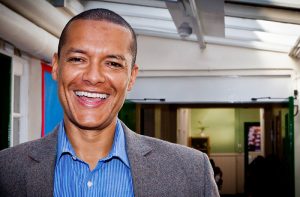 In an exclusive interview with the Clarion, Clive Lewis MP (Norwich South) talks about his views on the future of Labour and the way forward for the left.

Labour needs to get on the front foot and it needs to be bold.

We need to articulate a narrative and a vision for what the future looks like; until that is done in a joined up comprehensive way then that vacuum will be filled, inevitably, by the naysayers, by the critics, by those who want to undermine the Corbyn project. If we don’t come up with a positive agenda that enthuses, not just the core support of the Labour Party, but which reaches out beyond that, then there will be a vacuum that can be filled by negativity. You can end up lurching from crisis to crisis and spending your political energy on dealing with those crises, rather than going on the front foot and taking the fight to the Tories in a way that brings people to us.

There is a growing consensus for what Jeremy and Labour are saying at the moment, and it’s now about making sure that that is said in a way, in policies and narratives, which will bring those people in. We have to move outside our comfort zone. As the local elections showed, the two big parties are neck and neck. The Tories are trapped inside their ideology, they can’t shift. May has sometimes attempted it but she is blocked by Brexit or by the arch-Thatcherites in her own party. Ultimately she is one as well.

Labour has that room to manoeuvre and move outside our comfort zone and talk about policy which will appeal to people. Ones that tap into the current zeitgeist that something isn’t working in this economy and we need to fight for something quite radically different to replace it.

The 2017 manifesto was a social democratic reset. I met a delegation of Swedish social democrats, people who are centrist in terms of British politics, who have bought into many of the neo-liberal, Third Way-type arguments, but they are looking for renewal and came to London to speak to Corbyn’s Labour Party to see what we have done. When we talked about the manifesto, they said this is what they had been saying for a long time. It shows you just how far off the beaten track we had gone as a party that we see this as a radical or revolutionary manifesto! It was a reaffirmation of 20th century social democracy.

There are two schools of thought there. There is a school of thought which I don’t think people would consciously admit to, but it’s an instinctive thing, that we must tiptoe, the carrying the Ming vase strategy, where you take the 2017 manifesto, tweak it and make a few more offers, like free bus passes for young people, and hope the Tories fall apart.

The last set of local elections, with the two parties stuck on 35% and let’s not forget, this is a Tory party in complete shambles and disarray – I think it shows to you that the strategy of waiting for the Tories to implode isn’t going to be a strategy that will bring us victory! We have to reach outside our own comfort zone as well. That means thinking outside the box. I’m doing environmental economics, that means putting the environment at the front and centre of everything the party and the labour treasury and everything a future Labour government does. That’s an opportunity for really radical 21st century socialism. Until we start doing that I think we will be locked neck and neck with the Tories.

We have to do something about our membership. One of the things that has atrophied in the labour movement is political education. We are in the 21st century and we have modern methods we can use, but anti-semitism is a good example of how in the absence of good political discussion forums the vacuum is filled by hearsay and ignorance in many ways. So one part is equipping people with the tools to go out to people, not just with lines to say but with an analysis of what’s gone wrong and with solutions and answers as to how a Labour government would deal with that.

The second thing is mobilising the people to actually go out and do that. At the moment, for a party of six hundred thousand people, too many CLPs still see the same old faces going out. Outside London and the big cities the CLPs are still struggling to find enough people to go out. We are a mass membership organisation and I really hope that the kind of community campaigning activists that the Labour Party are currently taking on and the work that is going on behind the scenes can actually begin to activate more people.

Until that happens we will struggle to get our message across through the traditional media mechanisms which we know are weighted against us.