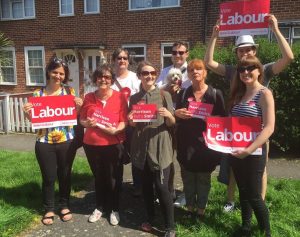 The steering committee of Lewisham Momentum (Lewisham for Corbyn – Momentum) organised an AGM, our third, for 23 April, and invited Alex Nunns to speak.

There was a push, motivated by petty factionalism, from people not involved to exclude the entire committee – including founders and people who’ve been working hard locally. Despite the committee being greatly expanded to encourage more people to get involved, they put together an entire slate, to get rid of us. They organised in secret and were not interested in discussing it.

National Momentum turned up to check people’s credentials, which delayed the start of the meeting. Far more people than expected turned up, and the people who run the venue said it wasn’t safe. We proposed to adjourn and reschedule.

The other side said they had an alternative, bigger venue and a vote was taken on that basis. This turned out to be completely false – they took about half the meeting to the front bar of a pub where they had an “AGM” with no checking of credentials – in stark contrast to the process national Momentum insisted on for our meeting – with people just sitting there or wandering in able to vote. They elected themselves unopposed as the new committee!

A comparable number stayed with us at the library for discussion and gradually quite a few people drifted back, some appalled and perplexed at what had gone on.

Obviously that makes no sense without political explanation. A big part of the justification was anti-AWL [the socialist group Alliance for Workers’ Liberty has been extremely active in Lewisham Momentum]. It seems all kinds of lies were told. It’s wrong to witch-hunt the AWL, and it also falsely portrayed the group as an AWL front. On that basis they’ve created totally unnecessary splits and divisions, because of their desire to exclude people rather than working together while discussing differences.

Beyond that, Lewisham Momentum is one of the oldest groups and one of the strongest – in the Momentum office’s words – and it’s been high profile and has been seen as oppositional within Momentum. Clearly national Momentum doesn’t like that.

Their role at facilitating the break off meeting was awful. With complete double standards, they’ve recognised the group set up at the pub. Of course, that reflects the ongoing lack of democracy in the organisation. The two people who have made decisions on this are not elected people, but paid officials. With no accountability, my membership money has been used to stitch us up.

It’s sad, Momentum nationally, or its leadership, are evidently not comfortable with being challenged. I’m not here to do as I’m told. This is completely the wrong direction for our movement; it’s supposed to be more organic and accountable than that. We say we want to democratise the Labour Party, but there’s no democracy in Momentum – it’s embarrassing. I’m also very disappointed in Jon Lansman, I spoke to him and he tried to completely evade responsibility.

I must add: a few months ago when I heard about Stalinists I thought it was a joke or an exaggeration. Now some of them are running the group claiming to be Lewisham Momentum. It’s pretty dark stuff.

We want to build a mass movement – this is not the way to do it! It is ridiculous, it’s a gift to the right, and weakening the left.

I am sorely tempted to resign from Momentum, but why should we leave them to run things? It’s our movement. And we must continue to work to make it better, in a local group focused on campaigning and political discussion.

• For Lewisham for Corbyn (Momentum)’s leaflet explaining in more detail what happened and the issues behind all this, see here.