By a Lewisham East activist

The candidate backed by the Labour right, Janet Daby, has been selected as Labour’s Parliamentary candidate in the ultra-safe Labour seat of Lewisham East. She won 288 votes, with left candidates Sakina Sheikh and Claudia Webbe getting 134 and 35 votes. The other right-winger shortlisted, Brenda Dacres, dropped out the day before the selection meeting.

Is this a defeat for the Labour left? In a sense, obviously. But let’s unpack it a bit.

There were widespread rumours that the party NEC would impose an all-left shortlist. Two things seem to have prevented that. Firstly, the right wing which dominates the CLP ran an aggressive campaign, with lots of media coverage, to demand the right of their candidates to be shortlisted. Secondly, a third left-wing candidate, Phyll Opoku-Gyimah, widely considered to be the frontrunner, dropped out suddenly. In this situation, the NEC panel bottled it.

In terms of whether they should have gone for an all left shortlist, you can certainly make a case that using the rules for by-elections to shift the overwhelming and unrepresentative right-wing balance of the PLP would have been perfectly reasonable. On the other hand, it did look a bit like using Blairite methods against their opponents (even if those opponents are Blairite hypocrites). In any case, the other part of the plan was an ultra-fast timetable. Originally the party was given only six days from applications and two from shortlisting to select; then another two and half days were added.

The incredibly tight timetable, combined with the right ending up being on the shortlist, made it very hard for the left, because Lewisham East is a heavily right-dominated constituency. (The other two Lewisham CLPs are run by the left.) The right has a roughly four fifths majority on the GC and has been very effective at keeping down a relatively weak left. Last year Labour First and Progress cited Lewisham East as their model CLP. Lewisham East has a relatively small membership compared to neighbouring left stronghold Lewisham Deptford (1,600 as against 3,500); but it may well be that a majority of members here voted for Corbyn in 2016 or joined afterwards to support him. However, the left needed more time to connect with and mobilise those people.

Things were made worse by splits in the Lewisham left. In April Stalinists around Red London, supporters of the Momentum office and hardline anti-Zionists drove an attempt to takeover the Lewisham Momentum group; they then walked out and created their own group, so there are now two in Lewisham. This is in itself weakened the left. Moreover the new group or most of it backed Sakina Sheikh while most of those in the existing group (including some Clarion contributors) backed Claudia Webbe for her labour movement record and generally sharper, more political arguments.  It could have been hard to get unity behind a single candidate anyway, but this split and the lack of time made it impossible. 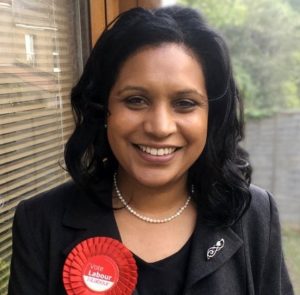 In the event, Claudia got a disappointing result. Most left-wing support in the constituency flowed to Sakina. I suspect that too was partly a result of the timescale – the Momentum office’s ability to mobilise quickly, its and associated social media networks (eg people around Novara Media), and the kind of people it can reach, outstripped Claudia’s slower-moving union support and allowed Sakina to get into pole position. Thus the narratives promoted by Sakina’s campaign, for instance obsessive repetition of the importance of her being “local”, were able to gain grip. (It should also be said that she was articulate and her campaign energetic.)

For a mix of reasons, Claudia had very strong support among Lewisham Deptford activists, stronger than in Lewisham East. There both the local candidate argument and the argument we can’t afford to lose Claudia from the NEC seemed to have real impact.

In addition to the wider political arguments about the “local”,  which definitely need more discussion in Lewisham and generally, there was a question about why Sakina has not been visible or present in Lewisham East’s Labour left. Isn’t it strange not to be active in your CLP but then stand to be its MP? A similar or related issue came up on the morning of the selection, when it emerged (if it’s true Unite leaked it, that’s bad) that she had had links to Take Back the City, a London anti-austerity/gentrification campaign which stood a candidate against Labour in East London in the 2016 assembly elections. Disputed details aside, we should defend people’s right to change their mind and join Labour, and in fact welcome such things. But shouldn’t you be upfront about your past? Wasn’t failing to disclose this issue a hostage to fortune? And do you need to stand in a parliamentary selection so soon?

Everything described above helped the right and Janet Daby. So, in heavily Remain Lewisham, did the fact she was the most strongly anti-Brexit of the candidates, a position with which many Clarion readers will sympathise (from a very different political angle).

This chain of events and outcome are not great for the left, obviously; but things are potentially better than they seem. In any previous selection in Lewisham East, the choice would have been between different shades of right-winger. Moreover one of the left’s most bitter and resourceful enemies, Heidi Alexander, has been replaced by a candidate, Daby, who says that she is on the left, that she voted for Corbyn twice and that she looks forward to a “radical Labour government” led by him. The point is not to trust this – in fact it will only benefit the left if we do not trust it. If we organise effectively, we can consolidate the inches we have gained in the CLP over the last six months, and gain more. The right has warded off disaster, but it will fall back further.

This in addition to the fact that the party made a success of having an all women, all BME shortlist, and that Lewisham will now have its first black MP.

1. Mobilise people for the biggest possible Labour majority in the by-election on 14 June. Come and help!

2. Maintain and developing Lewisham East CLP’s left caucus, Lewisham East Labour Left, which unites supporters of both sides in the Lewisham Momentum split and others, to draw more Corbyn-supporters into activity, recruit more members and push forward a fight to transform the CLP. The next meeting is on Tuesday 29 May, 7pm, at the Black Cat pub in Catford.