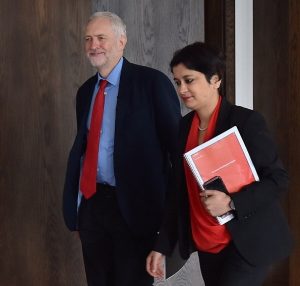 The recent statement by the leadership of Momentum taking on antisemitism is an important contribution to the task of improving the political health of the Labour Party and the left. It is important that Momentum has spoken out – but it comes after two years of silence.

Nor is it clear that Momentum is serious about moving forward on tackling this issue.

The context was increasing reporting of antisemitic social media content following the first Corbyn surge, and high profile incidents such as the first suspension of Jackie Walker for comments about Jews and the slave trade. I proposed a statement on antisemitism to begin a debate which was amended, agreed and supposed to go out – but never did.

To be fair, this was not the only thing proposed and agreed that did not happen. Momentum’s current lack of democracy was foreshadowed. In this case, I suspect the issue was preferring to deal with things quietly rather than saying anything which might cause a political blow up. Thus an opportunity to do anything about this issue early on was lost. The Momentum leadership/office’s pretence that it has suddenly discovered this issue is a bit rich.

Paradoxically, Momentum has also refused to do anything about the issue of justice for those treated unfairly by the bureaucratic whim of the party machine, suspended and expelled unjustly and so on. A statement about my expulsion (not connected to antisemitism) was, again, agreed but not put out; my proposal to campaign against the suspension of Jackie Walker – not because I agree with her on antisemitism, it should go without saying – from the party was voted down. To this day, Momentum refuses to act on these issues. In fact it has written the ban on non-Labour members holding office into its imposed constitution.

Meanwhile, the new statement on antisemitism, elicited because Momentum felt under pressure by the storm raging around it, is welcome but is weak on actual political content – weaker than the reply Jeremy Corbyn put out in response to the Board of Deputies and the Jewish Leadership Council.

That might not matter if it becomes the start of a genuine educational process. But what is to be the agency for educating Momentum and Labour members? Will it be open, critical debate and discussion in local groups, seeking to encourge a culture of debate? (Lewisham Momentum made some effort along these lines in 2016, holding a discussion on Israel-Palestine and antisemitism with speakers including Rhea Wolfson and Jon Lansman.)

That seems unlikely. The 2018 statements talks about ‘exploring partnerships with external organisations’. That is not wrong itself, but in the labour movement is all too often code for not taking issues seriously or having a serious discussion. In this case,who will the external organisations be? Doesn’t deciding that require having some discussion about where Momentum stands on all this?

Momentum should begin by encouraging its members to have some decent discussion about the issues, providing resources,suggestions for speakers and so on. More broadly what we need is to explore labour movement history and tradition and locate this debate within the class struggle, so we can find the rational and independent working-class answers so desperately needed.

Momentum’s National Coordinating Group (NCG) acknowledges the anger, upset and despair within the British Jewish community at the numerous cases of antisemitism in the Labour Party and the Party’s failure to date to deal with them in a sufficiently decisive, swift and transparent manner.

We also note Jeremy Corbyn’s personal pledge to be a militant opponent of antisemitism and a permanent ally of the Jewish Community — and his apology for the pain caused both to Jewish members of the Labour Party and to the wider Jewish community by what he describes as the “socialism of fools”, as well as newer forms of antisemitism which “have been woven into criticism of Israeli governments”.

Momentum’s NCG believes that accusations of antisemitism should not and cannot be dismissed simply as right wing smears nor as the result of conspiracies. Current examples of antisemitism within the Labour Party are not only a problem of a few, extreme “bad apples” but also of unconscious bias which manifests itself in varied, nuanced and subtle ways and is more widespread in the Labour Party than many of us had understood even a few months ago.

It is possible to accept that antisemitism is a problem in parts of the left and needs to be loudly denounced whilst also accepting that some of Jeremy Corbyn’s political opponents are opportunistically using this issue as a way to undermine his leadership. However, the actions of others do not reduce our responsibility to challenge antisemitism whenever and wherever it occurs.

Momentum has therefore resolved to explore partnerships with external organisations to deliver awareness trainings open to all Labour members; to renew our focus on a broad programme of political education; and to support any Labour Party initiatives in relation to antisemitism.

Furthermore, Momentum will review its constitution and complaints procedures in order to ensure that they are fit for purpose as a clear statement of Momentum’s values and practical commitment to stamping out antisemitism and all forms of discrimination. We will also provide further guidance and support for our local groups to help them in implementing these aspects of our constitution and upholding our values.

Momentum unambiguously condemns antisemitism, as it condemns all forms of racism and discrimination, and welcomes Jeremy Corbyn’s launch of an expert-led inquiry. We recognise that each form of racism has its own history, contemporary manifestations, nuances and particularisms, and that these each need to explored and understood to be overcome.

We hope that the inquiry is the start of a process of investigating how racism and oppression that in society replicate themselves in any way in the Labour Party. For the labour movement to fight these injustices effectively, we need comradely self-criticism, education and awareness-raising of these issues. We pledge that Momentum will play a productive role in this process, and will encourage members to express their experiences of antisemitism, Islamophobia and other forms of racism as part of the Chakrabarti Inquiry.

Momentum takes the need to the fight all forms of racism discrimination, including on the left and in the labour movement, seriously. We do not believe that questions of racism can be dealt with simply by people saying that they are not racist or prejudiced. A deeply analysis of the specific nuances is needed, which is why Momentum backs the Chakrabarti Inquiry. As with the recent controversies around antisemitism, the matter cannot be dealt with simply by people stating they are not antisemitic or just by drawing a distinction between antisemitism and anti-Zionism. Criticising Zionism is not necessarily antisemitic, of course, but some anti-Zionist politics is. Expressing solidarity for the Palestinians is distinct, and should be without any suggestion of antisemitism.

As a new organisation, we certainly have differences and disagreements, within this broad framework, in our ranks about issues of how Zionism and anti-Zionism are related to antisemitism. We will encourage a discussion throughout the organisation to draw out these differences, educate ourselves and develop our positions further.

In terms of the recent controversy, the left has nothing to learn from the Tory party and Tory press, as evidenced by the slew of bigoted and Islamophobic attacks on Sadiq Khan during the election for London mayor.

We also oppose the use of these issues as a factional weapon within the Labour Party, and to undermine the elected party leadership. We oppose the push to make it easier to expel people; there should be an end to factional expulsions and everyone should have due process.

In any this problem must be addressed politically, through discussion and education. This requirements an atmosphere of free speech and debate, where those raising concerns of antisemitism are taken seriously; where criticisms of Israel are not automatically shouted down as antisemitic; and where the discussion is not manipulated for factional purposes.

Momentum will encourage such a serious discussion in our own organisation as well as in the Labour Party and the wider labour movement and encourage members to participate in the Chakrabarti Inquiry.