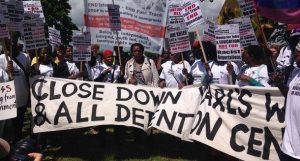 A Labour government would shut down the Yarl’s Wood and Brook House immigration detention centres and limit detention to 28 days – Diane Abbott announced. The £20m a year spent on the two centres would be re-directed into services to support the survivors of modern slavery, trafficking, and domestic violence. The speech, given to the Institute for Public Policy Research, also included a pledge to ban private companies from administering immigration and asylum services, and to repeal the “hostile environment” legislation which turns landlords and many public sector workers into informal border guards.

These announcements are a step in the right direction. Credit needs to be given to those who have tirelessly campaigned against immigration detention, putting pressure on both the government and the opposition. The reason why Yarl’s Wood and, to a lesser extent, Brook House, have become so notorious is thanks to the efforts of those organising outside and inside of them. Years of protests, investigations uncovering horrific human rights abuses, and finally the recent Yarl’s Wood hunger strike, have made these institutions synonymous with the worst of state violence against migrants. It is encouraging to see Labour commit to shutting them down and introducing a time limit on detention (Britain is currently the only country in Europe without one.) However, this should be the start and not the end of our ambitions. Nationalised detention centres would fundamentally still be prisons for people who committed no crime other than being born in the wrong place. Our goal should be close them all.

Under Corbyn’s leadership, Labour has shifted towards a rhetoric that is more positive about migrants – gone are the days of “controls on immigration” mugs. Abbott in particular has been rightly making an effort to emphasise not just the economic contributions but the humanity of immigrants, and the fact that it’s employers and the government, not foreigners, who are to blame for low wages and living standards. Unfortunately, the commitment to ending the hostile environment was soon followed by a reminder that Labour would hire 500 additional border guards to tackle “illegal” immigration – showing that on migrants’ rights, Labour is still trying to have its cake and eat it.

To win the argument on migration – and there are millions of voters who we must convince – we need consistency in our message. This is both necessary and possible. In the past two years, opinion polls have already shown a steady decline in the number of people naming migration as the most important issue facing Britain. However, still too many fear the impacts of immigration, and the way to change minds is not to pander to right-wing lies but to tackle them head-on while offering genuine solutions to the problems of working people. During the last general election campaign, we successfully persuaded a large section of the population that austerity and neoliberalism are not inevitable. Now it’s time to win the case for migrants’ rights.

But rhetoric is not everything. In policy terms, Labour is also slowly moving forwards but there is a long way left to go. Labour won’t truly end the hostile environment while it remains committed to No Recourse to Public Funds – the policy that allows the gatekeeping of NHS access, has been used to deny children of migrants free school meals, and which forces migrants to accept low-paid jobs and degrading working conditions out of fear of destitution. It also perpetuates the myth that it is migrants putting pressure on public services, and not decades of cuts and systematic underfunding. Finally, the pro-migration narrative rings hollow as long as Labour still supports the biggest expansion of border controls in recent history: the ending of free movement with the EU. Freedom to move allows migrants to work legally, to unionise and to fight for their rights hand-in-hand with UK-born workers, without risking deportation. It’s a right that must be extended, not sacrificed.

Nevertheless, Abbott’s announcements show that the efforts of migrants’ rights campaigners are paying off. Those who would like to see a society where one’s life chances are not determined by nationality have a crucial role to play within the Labour Party, organising for more pro-migrant policies – as well as fighting for a Labour government to end the inhumanity of the Tories.