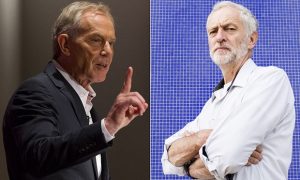 I have been asked to write an article on why I switched from being opposed to Jeremy Corbyn to now supporting him and joining Momentum.

First, in terms of social policy I have always been a man of the left. Where I diverged from Wedgie Benn in the 1980s and I am still a sceptic is massive increases in public expenditure that are not effectively targeted and massive tax hikes. For example, I thought the leadership of Waltham Forest Council in 1986, then Bennite, in putting up the Rates 63% was daft and hit the people we are trying to help.

I am also a non-believer in state-run bureaucracies running everything. The incompetence of large organisations, whether public or private, is there for all to see. It is only the motivations that are different.

So, why did I change?

First of all I believe modern politics has become too tribal or, more like a football match. As long as we win, even if it’s a boring 1-0 then that’s all that matters. I have listened to Jeremy’s supporters, particularly influential on me have been Harrow East’s PPC Pamela Fitzpatrick and my older son, Paul Kendler. They, and others have convinced me that it’s not just winning but Jeremy wants to bring a see change in the lives of working people in the UK and try to make this country a fairer place to live and work.

That’s important as I felt Blair and Brown became technocratic and had no passion although Brown did have some feel for the plight of the working class from his time growing up in Scotland. Also, Britain has become a scruffy, angry nasty place since Cameron took power in 2010 and I feel much has been lost that was decent in this country.

Also, we go out to campaign to persuade voters to vote for us, to think about what we offer and to even change peoples minds. If we want voters to change their minds why can’t members of a political party change their minds. Otherwise its tribalism again. One of my favourite journalists is James O’Brien and he has often said that people have stopped thinking. They only listen to arguments that suit their opinion, even if their opinion is wrong. So I have changed my mind and there is nothing wrong with that.

So, again why have I changed my mind?

Well, as I have explained I listened to people I respect and admire. Secondly, I thought Ed Miliband’s leadership was an unmitigated disaster and our platform for 2015 was an awful fudge. Some on the left called it Tory-lite. I do not think it was that well-defined. It wasn’t anything. It wasn’t Blairism, it wasn’t socialist, it wasn’t liberal.

Then when Miliband resigned as Leader we had the 2015 Leadership election. I supported and worked for Yvette Cooper. Why? Because I thought it was high time Labour elected a female leader and I still believe that has to happen and soon. It’s a bloody disgrace that the Tories have now had two female Leaders and Labour none. There is a streak in Labour that is misogynist despite 60% All Women Shortlists. But I digress. Was I enthused by Yvette? No. Was Andy or Liz Kendall any better? No, No, No. I was staggered that the party voted for Jeremy but felt the right only had itself to blame.

The we had 2016 and Owen Smith. I worked for him only until I met him. What a clown! Then it dawned on me. Why did Jeremy win, why are centre-left Parties losing all over Europe, why did Hilary Clinton lose in the US. Because the liberal-socialists are intellectually bankrupt. The great financial crash of 2008-2009 had undermined them and broke the belief that our job was to manage capitalism in a more humane way than the Tories/right. Also, fascism and racism are on the rise and we needed an answer and when I saw Jeremy perform and I read the 2017 manifesto I realized here is a realistic alternative.

I was also influenced by my experience as a Councillor on Harrow Council and my more recent experience as a volunteer at Harrow Citizens Advice. Harrow Council delivers an awful product. It’s customer service is dreadful, it’s housing management is second-rate, its regeneration and planning policies are unimaginative and will not the low-paid, and its approach to debt recovery is draconian.

To hear the Leadership of the council claiming credit for budgets which are driven by George Osborne, Phillip Hammond and austerity, and to take credit for good financial management when our supporters are really suffering is sickening and illustrated to me, in clear tones, the bankruptcy of the so-called moderates in the party.

I also was impressed by last year’s manifesto. To have a manifesto that would commit to reversing austerity, to try and rebuild a badly damaged public sector and to have no fear about tax increases but to target them was impressive. It clearly enthused the electorate as well.

So that is why I have changed my mind and support Jeremy and Momentum. Because I believe there is an effort to listen to members, to democratise the party, to be radical and to tackle the key issues of housing, welfare, job security, low wages is all brilliant and I support it and want to see it happen.

Do I have any question marks? Yes. I am not tribal. I still have a lot of doubts about Jeremy on Defence, Foreign Policy and security. I am not a fan of universalism as too many well-off people get taxpayer hand-outs. I would like to to see Local Government finance reformed to get Local Government going again. The Housing Green Paper is too much about municipal housing. It will not help the young in the private sector. But that can all be debated.

Looking forward to a Corbyn Government.