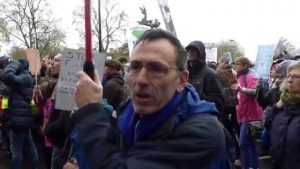 The Jewish Chronicle reports on the expulsion of Fred Leplat from the Labour Party: “Hard-left ‘revolutionary’ who met Jeremy Corbyn in Barnet ahead of local elections is expelled by Labour Party”.

Can I say, as somebody who has known Fred for a very long time, and has respect for his organisation Socialist Resistance, that the JC report is more than incomplete?

Why was this expulsion so rapid?

Fred and SR have never made the slightest secret about their politics.

LePlat is well known, and liked, by many people on the left and the labour movement as his position as Barnet Momentum secretary indicates.

The views of SR on broader issues in the Middle East – one of the few groups on the left to defend consistently Syrian Democrats against Assad – should be taken into account.

For the letter Fred coordinated that was involved in his expulsion, see here.

In terms of the claim of faked signatories, supporters of Fred say, “There is an email trail showing people agreed to add their names to the letter”.

I and other comrades not not necessarily support the signatories’ take on all the issues, notably the blanket use of the term “Zionist”, but there is room in a democratic socialist party for disagreement within these boundaries. I note that the letter states support for implementing the “recommendations of the 2016 Shami Chakrabarti report”.

It is in defence of Corbyn’s support for the Palestinians and in opposition to anti-Semitism, not the wild ‘anti-Zionism’ that people are rightly concerned about.

One could also comment on the idea that membership of SR is an offence leading to automatic expulsion.

There are serious questions here.

• More analysis by Andrew at tendancecoatesy.wordpress.com