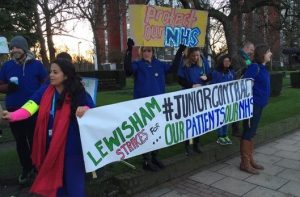 In 2016, during the junior doctors’ strike, Lewisham Hospital nurse Anita Downs sent this open letter to Heidi Alexander, who was her MP and Shadow Health Secretary. Anita is now the convenor of Lewisham East Labour Left. She can be contacted at anitacmd@gmail.com

At our Lewisham East Constituency Labour Party meeting on Friday, you said you wouldn’t be attending the junior doctors’ picket lines at Lewisham Hospital this Wednesday because you “also represent patients” whose treatment may be delayed by the strike. I am writing because I want to take issue with that, and urge you to change your mind.

As a member of your CLP, a nurse and branch secretary for Unite the Union, I was very interested to hear your report as Shadow Health secretary, glad you raised the junior doctors’ dispute and pleased you said you supported them – but therefore very disappointed when you said you wouldn’t join the picket lines.

As I said to you on Friday: this strike is to defend doctors’ terms and conditions, but also to defend the NHS. The same goes for the student NHS workers’ walk out about bursaries which will take place the same day. A victory for the doctors, and for the students, will benefit patients rather dramatically by boosting the fight to preserve the NHS. If you want to support the interest of patients, that is all the more reason to attend the picket lines.

We should be stressing that NHS workers’ and NHS patients’ interests are aligned, not counterposed. Patients who have appointments or procedures scheduled for 10 February may suffer some delays. But that is nothing compared to the disastrous consequences which will follow if the NHS is dismantled. It does not compare to the risks posed by having grotesquely overworked NHS staff making life changing decisions at the end of a 72 hour week. In any case, the blame for inconvenience lies with Jeremy Hunt and the Tory government. The junior doctors would be providing care as normal if the Tories were not attempting to wreck their contracts.

You must know that the junior doctors are in the front line of the fight to stop the imposition of even more unsociable hours on NHS staff, reducing safeguards which lessen the chances of overwork and so defend patient safety. You should know that all this is part of a plan to cut back on unsocial hours payments and incremental pay rises for all NHS workers, to impose an arbitrary new working pattern on all areas of the health service, regardless of need or safety, and to beat down and demoralise the workforce to prepare the way for even wider privatisation. The consequences for patients are all too clear.

Unfortunately, many of my members in Unite, and many other NHS workers, already work for private companies with contracts in the health service. Many are on zero hours contracts and the minimum wage, many more just above such conditions, and many regularly report alarming health and safety issues all the time. My members are at the sharp end of contracting out and privatisation in the NHS, we see the harm it does, and so we are glad that the junior doctors are taking up the fight to protect safety as well as terms and conditions. Their fight is inspiring, and a victory for them will make us all stronger.

I am a member of the Labour Party because I want a party that will represent working people, a party that will stand alongside trade unions, a party that will defend, champion and restore the NHS. That is what Labour should be. Labour MPs should be well aware that going on strike should be the right of every worker, and more than that, that striking to defend our interests is legitimate and not something to be ashamed of. Now, every NHS worker will consider the issues extra carefully before going on strike – you must be aware of that too, aware that the junior doctors have not taken this course of action lightly and that they have worked hard to develop a strategy which combines hitting the Tories with protecting patient safety.

As Labour Shadow Health Secretary, then, you should be standing with the junior doctors – figuratively, yes, but also literally on the picket line. The doctors’ and their union are demanding solidarity; we all have a duty to answer their call, but you have an extra duty. People will notice what you do. You can make a real difference to helping the junior doctors win. If you want to support the doctors, support patients and support the NHS, you should reverse your decision and come down to Lewisham Hospital on Wednesday morning.