Heidi Alexander, Labour MP for Lewisham East, resigned today. Lewisham East Labour Left welcomes the opportunity for a democratic contest to decide who will represent the Labour Party, labour movement and people of the constituency in Parliament, and an open debate about the policies and principles our movement stands for.

We want an MP who will stand up for labour movement and socialist values and policies, and support struggles by workers, the community and oppressed groups in Lewisham East and beyond. An MP who will fight, in Parliament, in the party, on picket lines and in our community, for decent jobs with a living wage, security and workers’ rights; decent homes for all; the rebuilding of social provision; an attack on inequality; ending privatisation and increasing public ownership; expansion of democracy; and migrants’ rights. We want an MP who is eager to campaign for and be part of a left-wing Labour government with Jeremy Corbyn as Prime Minister.

We held a meeting on 7 May to discuss this issue and will be holding another meeting on the evening of Sunday 13 May at 7pm – venue tbc shortly. All Corbyn-supporters in Lewisham East Labour are welcome to attend and take part. 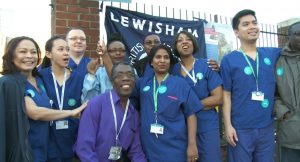