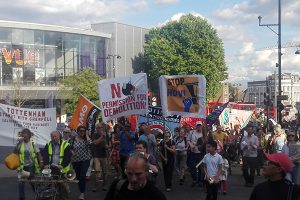 On 7 May, the joint general committees of Hornsey and Wood Green CLP and Tottenham CLP were called into a hustings for the candidates to lead Haringey council, whose previous Blairite leader Clare Kober resigned after her HDV “redevelopment” plan was defeated. Ordinary members were also able to attend but not vote.

This came about after a member submitted a motion through Noel Park Branch Labour Party calling for the GCs of both constituencies to elect the Leader and Deputy Leader along with Labour Group (the group of elected Labour Party councillors).

This was amended in line with the Party rulebook which says, ‘The appropriate Local Campaign Forum of the Party shall have the right and opportunity to submit names for consideration, but formal nomination and selection shall be as specified in the group standing orders.’

The LCF was therefore able to hold a meeting where an indicative vote was taken on members’ view of who should be the next Council Leader, with GC delegates casting votes.

Each of the five candidates was able to give opening remarks and a closing speech. Six questions were taken from the floor.

All the candidates spoke about the need to build more council homes; to raise funds including through a possible raise in council tax for the highest bands to offset cuts; and to make Labour Group, Cabinet and the Leader more democratic and transparent. 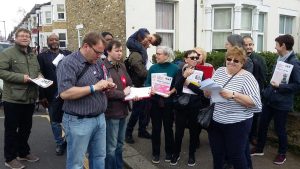 The main differences between the candidates, as far as I could tell, was their record in opposing key council decisions such as the shelved and unpopular Haringey Development Vehicle and privatisation measures.

The general sense of Party members and candidates is a drive towards bringing services in house and against public-private partnerships.

Lots of questions remain unanswered in the details of how the Council will implement its 2018 manifesto and where it will find the money to offset budget cuts.

There’s also a risk of Haringey being made an example of by the national government and facing even more swingeing cuts. As yet we have no clear strategy of how we will fight back with other local authorities and activists against cuts and for the restoration of funding.

Had my question been picked, I would’ve asked what the Leader would do if council employees took industrial action against the council. We have seen boroughs like Lambeth where a Labour Council has come down on unions for representing their members properly and fighting to save jobs.

A Labour Council should put workers’ rights at its heart, especially those of its own employees.

Labour Group is meeting this evening (8 May). It may well decide on a different leadership candidate than the joint GCs’ pick. Party members should have more than just an indicative say. But it’s still much better than previous practice and I hope to see it replicated in other areas.

This branch/GC/constituency notes that under Party rules, the Local Campaign Forum has the right to submit names for consideration by Labour Group for Council Leadership positions. (Chapter 13 clause 9.)

This branch/GC/constituency therefore calls upon the LCF to organise a meeting to consult members before the Labour Group elects its leader and deputy leader.