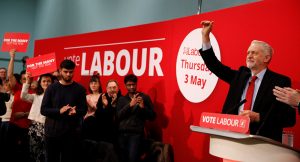 Simon Hannah from Wandsworth Momentum looks at the state of the Labour left after the 2018 local elections.

The expectations around the local election results were so high that you needed an oxygen mask just to reach the top. After the successes in the 2017 general election and the polls showing that 55% of Londoners were Labour voters, many of us believed that the red wave would come sweeping through the municipalities with a vengance. There was some concern about the Brexit voting areas but confidence nevertheless remained high.

And the result was… ok. Labour’s share of the vote in London was the highest since 1971 and if a general election was called in May on the kind of results that the Tories got in the locals then they would lose government. Winning Plymouth and Trafford was good. So a few positives. Inevitably, even though Labour got a solid result, gaining councillors overall and making gains across the country – it has been reported as a disaster.

But because we believed we would win Councils that haven’t been Labour ever or in 40 years (like Westminster or Wandsworth) failing that expectation came as quite a blow. The Tories managed to hold onto all the target councils in London, defying expectations of a wash out as London ‘turned red’. Theresa May saw it as an endorsement of her political agenda and gleefully turned up at Wandsworth Town Hall the day after the election to trumpet the blue flag still flying in Margaret Thatcher’s favourite borough. Worth noting however that with only 200 extra votes in 4 wards Labour would have secured 4 more councillors to make Wandsworth go to No Overall Control.

Local elections are often seen as a bell weather for national results but this needs to be taken with a pinch of salt. The Tories got hammered in 1991 (losing 1035 councillors) in the locals then went onto win in 1992, likewise Labour did well in 2014 (gaining 324 more councillors) but then lost the 2015 general election. Largely speaking people vote in locals for all kinds of reasons that aren’t always indicative of the national trend. The success of the Lib Dems on 3 May is one example. But one important trend can be discerned, the collapse of the UKIP vote into the Tories. This – more than any personal endorsement of Theresa May – is the primary reason she remains in power, hard Brexiteers are looking to her party to deliver us from the EU.

Despite this, the right are already using the indecisive results to stick the knife in. Progress’s Chukka Umuna has already called for an independent inquiry into why Labour didn’t do better, even when his colleagues in Lambeth also lost seats to the Greens over concerns about austerity and library closures. The right want to make hay while the sky is grey – conveniently forgetting that councils like Wandsworth and Barnet were never won, even under New Labour at the height of Blair. They denounce Jeremy Corbyn as a false messiah and then condemn him further when he fails to produce the miracles they claimed he could never accomplish.

Naturally many on the left have grasped for some obvious explanations – the weeks of negative press barrage against Corbyn and Labour over allegedly being soft on Russia or institutional anti-semitism have made a dent – certainly it probably set us back in Barnet. They blame the tepid campaigns run by the right wing councillors, the lack of vision or energy from the party machine.

All those things are a factor, but we also have to think about how the local elections demonstrate the limits of the current political project the left is involved in.

Let’s start from the politics. It is clear that Corbynism has very little to say about local government. Aside from a vague anti austerity message and repeated appeals to the Preston model (outsourcing local services to local businesses not bigger companies), Corbynism has no programme for local government and no strategy for left councillors. It cannot really confront the problem that most councillors are on the ‘moderate’ wing of the party and have no interest in the kinds of radical policies the left are putting forward.

There is also a structural problem, local government has been so hollowed out in the last 40 years that without either a massive campaign from below to force change or securing central government and changing the law – councillors can do very little. This is why the Preston model is so popular on some of the left – it looks like a good project in the face of the absolute impotency of councils to implement any genuine municipal policies.

In addition there simply wasn’t the same energy around the local elections as there was in the general. This was partly because a lot of the newer Labour activists were pretty ambivalent about them in terms of the kind of people that were getting elected and the tacit understanding that without a more ambitious vision then the elections were to a large degree going through the motions. Put simply a lot of the left are very highly motivated when it comes to getting Jeremy Corbyn into Number 10 but are less interested in local politics.

In a manner of speaking not much has changed. The lack of a political project form the left for local government and the lack of a means to implement any radical ideas no doubt will mean that people just move on to other political questions. That would be a mistake however.

Local government is dying. Well, more accurately being slowly murdered by the government. Already a number of councils are issuing warnings that they might go bankrupt due to Tory cuts. One (Tory!) council is already on the brink. Yet it is where we care for some of our most vulnerable and where important decisions are made about our local environment, from housing to libraries to waste collection and park maintenance.

For all the talk of a return to municipal socialism from Corbyn and others – this has yet to materialise as a coherent political movement with goals and the activists willing to do it. Momentum came into the local government election quite late in the day and despite some training being offered to council candidates very few activists were very clear what particular vision Momentum was pushing. An article by Beth Foster Ogg in the Guardian didn’t even mention a campaign to restore funding and Labour’s 2017 manifesto pledged no extra money for councils. So even a Labour government being elected tomorrow would only halt cuts, not reverse them.

This set of council electons won’t come around again until 2022, when there will potentially be a general election. Can we do better by then?

EXTRA: The problem with the Preston model

From next year local councils will get 100% of the business tax and the year after they are losing all their central government funding. The ideological purpose of this change is to force local government to make up for its loss of funding by promoting and expanding the local capitalist economy to boost tax revenue. This is essentially what Tories want Local Government to become, a machine for promoting capitalism whilst also providing social services – the kind of work you can’t really privatise.

In that context the Preston model accepts that reality but tries to do it in a more left wing way, it accepts the reality of outsourcing but says that local businesses should be hired instead of large multinationals. It also advocates using contracting out to promote workers’ co-operatives.

There are inevitable problems of inefficiency with economies of scale in such a model but it is also an alternative to a national campaign led by councillors to challenge the entire attack on public sector municipalism.