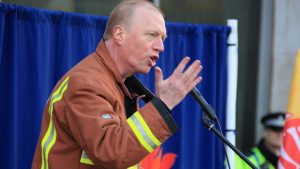 Fire Brigades Union general secretary Matt Wrack has spoken to The Clarion a number of times, including about what he means by socialism. In May 2018 we put together these excerpts as a useful summary and basis for discussions.

When I was growing up, lots more people would have described themselves as socialists.

Jeremy Corbyn and John McDonnell have referred to “socialism for the 21st century” and so on. That gives us the opportunity to discuss again what socialism means. We should try build a socialist renaissance in the labour movement.

We face the fact that these ideas have been pushed off the agenda for a long time. There’s been a bit of a fluffiness around the Corbyn movement. Understandably, people see Jeremy as a sort of figurehead, he’s played a crucial role. The danger is that people think that this particular leader is going to sort everything out for us, when actually it’s going to take a lot more than that.

The FBU rule book talks about “the socialist system of society”; its authors clearly saw that as something comprehensively different to this system of society. It also discusses how firefighters are workers, and part of an international class.

We start from the point of view that whatever work we’re doing – the work may take different forms – we are workers. We don’t own the means of production. We can’t live except by going to work for someone else, for a wage.

The wage of a labourer in Bangladesh might be a world away from a firefighter in the UK, but both of them are only a month away from poverty. As soon as you stop working you get thrown onto the scrapheap.

Why are we in that position, when a small minority are in a very different position of actually controlling the economy? The economy is run in their interests, in the interests of profit, and that determines and shapes the whole of economics and politics.

Socialism is saying we should fundamentally change that. The people who do the work should control the economy, the means by which we produce things, what we produce, how we produce it, what we produce it for. You end production for private profit, and you find ways of producing for need, which at the same puts the majority really in control of society, so genuine democracy.

Lots of people who describe themselves as socialists think it’s about raising taxes on the wealthy to fund services. I’m in favour of that, obviously, but the long-term aim is much more.

Stalinist politics is not really reflected in the FBU now, but historically the union had a big Communist Party influence from the 1940s onwards. The fascinating bit is what happened in 1956. The General Secretary, the President, and a number of our Executive Council members, were CP members. In 1956, the entire CP group in the union’s leadership resigned from the party in protest at the Soviet invasion of Hungary. The union passed resolutions in support of the Hungarian workers.

I find it bizarre that people could have illusions in those sorts of systems, with their lack of democratic rights, lack of trade union rights and so on.