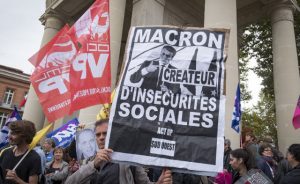 • Olivier is a French socialist, trade unionist, and writer for Arguments pour la lutte sociale. This article was published in Clarion 15 at the end of April. Clarion supporters visited France around the same time and we will carry updates on the situation in the coming week.

President Emmanuel Macron – who owes his election to the elimination of left or labour movement candidates in the first round of the Presidential election, against a backdrop of massive abstentionism – was able to force through his law against the Labour Code in Autumn 2017.

That gave Macron the impression that if he carried on in this vein, he could complete his anti-social transformation of France before the end of his term in 2022.

And so Macron has undertaken a whole raft of counter-reforms, which is slowly but surely creating a rising wave of mobilisation.

In France, since 1945 and the creation of the Social Security, social protection is financed from contributions paid by workers and bosses, assessed on the basis of their basic salary. Since the creation of the CSG by Rocard [leader of the French Socialist Party] in 1993, a movement started which allowed bosses to get off paying their share, and this practice has become widespread. That means that retired workers’ pensions are taxed in a way that they weren’t before the CSG came in.

On 1 January this year, Macron increased the CSG charge applied to pensions by 1.7%. Mainly hitting small and medium pensions, this measure saw a united response from all the pensioners’ trade union organisations (except the CFDT trade union federation, which is in favour of the CSG in principle, and supports Macron), which led to the big demonstrations of pensioners on 15 March.

2) The movement of workers in sheltered accommodation system EPHAD broke out into an unprecedented wave of strikes and demonstrations on 15 March.

Budget cuts are turning these hospices into sinister places of death where there is no longer any guarantee of care or minimum respect for patients. The – mostly female – workforce suffers from precarious contracts. They are weakly organised, but enough is enough.

This movement, with pensioners’ demonstrations on the same day, gave a sign of the depth of the rejection of Macron and his policies, which is shared even by previously-little-organised groups of workers.

In early March, the government opened “negotiations” with the public sector trade union federations by sending an incendiary message which proposed four big attacks on public service terms and conditions:

a) the fusion of CTs (Technical Committees, elected at the level of Ministries and local services to discuss organisation of work and services) with CHSCTs (Health and Safety and Work Conditions Committees), with the aim of greatly reducing trade union representation among state employees, and cutting the money spent on facility time for trade union reps attending those meetings.

b) undermining in-house public servant employment status, to promote the recruitment of contractors who don’t have the same legal employment rights, or job protections.

d) voluntary redundancies as a means of hitting the target of cutting 120,000 public servant jobs. This attack led to a huge turnout from public sector workers from all trade union confederations on the 22 March day of action, alongside the railworkers who were coming out for the first time.

4) The attack on the SNCF and the railway workers

The government wants to undertake a “great reform” of the SNCF state railway company on a pretext of paving the way for competition on the rails. The project aims to undermine railworkers’ special employment conditions, in particular their “special regime” for retirement, which allows them to retire at 51 or 55; their career progression programme; their holidays and rest periods; and several other advantages like free tickets for railworkers and their families. It also aims to close branch lines, so as to favour the big lines that run TVG trains.

The attack on their special status will take the form of recruiting new workers who won’t benefit from it, to work alongside existing staff.

All the federations have agreed a timetable of mobilisation, involving a series of two-day, and then three-day strikes, running from 3 April to June.

The Sud Rail union, for its part, has tried to maintain a strategy based on “reconductible” [repeated] strikes based on daily decisions in workplace assemblies, but for the time being it has signed up to the joint calendar of action, while Sud Rail activists try to get workplace assemblies going to vote to extend the action.

5) The movement of students against the ORE law

The Education Minister wants to limit access to universities for students who have passed the baccalaureate exam. Currently any student who has passed their “bac”, including those with a “bac pro” or vocational qualification, can sign up to the university course of their choice.

A pernicious form of selection has been implemented which relies on a rather dubious evaluation of the abilities and preferences of lycée students who want to apply to university.

This law has provoked the occupation of around 20 universities by their students so far.

6) The movement against school class cuts in rural areas

In rural areas the government is giving primary school classes the chop. Local campaigns have mounted occupations of schools by hundreds of parents, in areas unused to big movements.

Everywhere, the logic is the same: civilisation, public service, and rights for all, against market society and untrammelled competition.

As with Thatcher and the miners, so with Macron and the SNCF railworkers: it’s a race. Will battle be joined on the railways fast enough that the railworkers aren’t isolated and weakened? The speed with which the battle spreads depends above all on political conditions.

Since the electoral defeat in 2017, there is no political representation of workers, and no political perspectives. La France Insoumise, far from being a solution to the problem, is becoming an important part of the problem: Mélenchon’s perspective, when you strip away the verbal radicalism and soapbox bombast, is all about respecting the electoral calendar: European elections in 2019, municipal elections in 2020, Presidential election in 2022.

Workers and young people have no time to waste: they need a plan for the struggle based on a desire to beat Macron, here and now, and drive him from office.