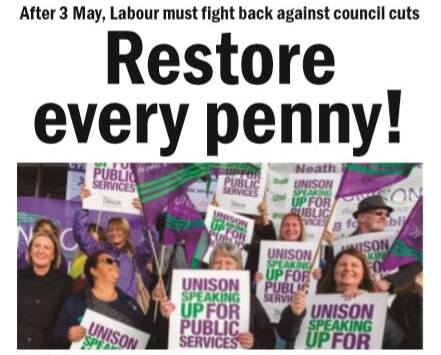 From issue 15, out now – by Daniel W. Round, Stourbridge CLP

Whatever the result of the local elections, it is becoming ever more urgent for Labour to look at its strategy for local government. The party needs to start demanding and campaigning for the restoration of every single penny of local funding lost since 2010.

Councils have found it difficult to cope with the immense pressures on local services from Tory cuts. By 2020, my local authority in Dudley will have received around £100m of cuts to funding. In response to austerity, some Labour councils, such as Preston with its local procurement strategy, have been able to innovate to aid the local economy. Others have, to a limited extent, campaigned against cuts. Bristol’s Marvin Rees, for example, called some well-attended demos in the city soon after he was elected mayor in 2016. However, one of the main features of the last few years has been the lack of real resistance.

There is a rich history of Labour councils leading local resistance – Poplar in the 1920s, Clay Cross in the 1970s and various councils at different points in the 1980s. But we haven’t seen anywhere near these levels of resistance since 2010, despite the unprecedented pressures. This is partly due to the threat of the Tories imposing unelected administrators if councils, for example, set illegal budgets. It is also due to the timid politics of many Labour councillors.

Lack of active resistance has been more pronounced since 2015 when there was an expectation that Corbyn would shake things up. Soon after his election, however, Corbyn insisted Labour councils should not set illegal budgets. This may have been a strategically wise move at that time given the position we were in. But with Labour’s success at the 2017 election, the strengthened position of Corbyn and the left, rising dissatisfaction as the cuts bite even harder (some councils are now struggling to meet even the basic statutory requirements), and more cuts to come, Labour now has the opportunity to be much bolder. The NEC’s intervention on the Haringey Development Vehicle earlier in the year hopefully opens up a space for further positive interventions from the party on local government.

Ideally this requires the leadership to coordinate regionally or, better, nationally. However, Labour councillors and council leaders can and should do more. Lack of action gives the Tories the chance to argue that poor local services are the result of mismanagement and waste rather than savage central government cuts.

Labour councils willing to engage should set up democratic committees to oversee a re-energised and dynamic anti-cuts campaign. These committees could be formed of some Labour councillors plus representatives from each of the CLPs, local Momentum groups, Young Labour groups and women’s forums, and from each of the main local union branches. Representatives from various local civil society organisations and charity groups that do work on, e.g. homelessness and mental health, could also join to share their expertise when organising campaigns on specific issues.

Demos would bring together Labour activists from across the local authority, trade unionists from inside and outside of the Labour Party, and other activists and members of the public.The location of demos should alternate between the big towns in the authority and would be held on a regular basis. Councillors could speak, as could activists from the CLPs and community groups. Demos should be organised around specific issues – so, for example, the impact of local government cuts on education, social care, women, etc.

Councillors should put forward a motion to coincide with the launch of the new campaign group, calling for the full restoration of funding lost since 2010 (at least!). Motions should also strongly state our movement’s opposition to outsourcing and academisation; the precise wording would be discussed and agreed to by the campaign committee.

A radical motion in the council chamber would – in conjunction with a new locally focused campaign – signal that the Labour leadership on the council (or, if unwilling, left-wing councillors) have resolved to do things differently. Well publicised, it would demonstrate serious intent.

Pressure on the leadership

We strongly agree with John McDonnell’s call for “an urgent change of direction in local government funding”. Labour should be for the full restoration of funding and the re-empowerment of local government when it comes to power.

But we need to do more now – we can’t simply wait for the election of a Labour government. It’s time to step up our efforts after the local elections.