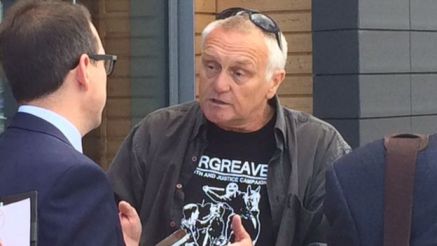 “We are all here because we want to change society. As an ex miner I have a campaigning role on behalf of the Orgreave campaign. It’s been a long lonely struggle since our strike was defeated 30 years ago. But now I speak to packed rooms like this. I’ve been talking about Clay Cross,which started 44 years ago. These are things that are important and people are steadily waking up.It’s a time to be optimistic. When I stepped off the train at
Euston at 10am this morning, I literally had to step over somebody huddled up in a sleeping bag — homeless. A decent society would built a home for him, would have community facilities for mental health. We need socialist councillors who are campaigning for these things. In our communities, especially in places like Barnsley — the old industrial centres where housing is cheap — you have houses bought up by G4S (the government approved contractor for handling migrants) who buy a terraced
house for £60K and put 10 people in it, two to a room. They all share a toilet. We have a woman with a baby who came in for ESOL lessons.If
she gets the right to stay, G4S aren’t responsible, so they throw them out and move them on. So people have no continuity. People who have fled war and hunger and famine and all sorts of things and they have ended up living likethat. Because we don’t build council houses! That’s why you need socialist councillors. That is the breeding ground for racism because migrants and refugees are dumped in areas with no back up, no extra facilities, no extra doctors with social services slashed to the bone,so it’s no surprise they get scapegoated. We need a massive program of house building but we also need
Labour councillors with convictions, people who don’t just want to wear a shiny suit — we want people who can go out and deliver.

Clay Cross
Now I’m proud of getting surcharged in Clay Cross. It is possible to make little changes even if you are in a minority of one. After my disqualification, eight years later I went back on North East Derbyshire district council, and I eventually became deputy leader.
We built women’s refuges, we fought to keep all services in house,when the government was forcing people to sell off their housing stock we refused.We still built council houses. We weren’t doing anything revolutionary but were trying to look after our people.
When the FBU went on strike in 2002/2003 Blair was happy enough to send the troops in to scab to try and break the FBU. I was the leader of that Fire Authority and my deputy was a lad called Chris Williamson from Derby.We took a decision to support that strike and the fire fighters’ pay claim. We were the only fire authority to do it. As leader I
went on strike with the firefighters and gave my councillor’s allowance to their strike fund. I never thought I would be back active, although I kept my Labour Party membership. I’ve been a member for 47 years, signed up at 19 by Dennis Skinner.
I had a brief interlude when they threw me out, after I had an altercation with one Owen Smith who tried to hijack our strike at Orgreave. They took me back cause I was part of the Orgreave campaign and they were embarrassed by that. What an indictment of our
party that it would rather throw socialists out of the party than embrace them and encourage them to become councillors or MPs. The new left But things have changed. Corbyn becoming leader has transformed our party. We need to keep people involved.We need to make Labour a political party. Let’s make our meetings political. People joined to defend Jeremy Corbyn and to change society. You are not going to do that sitting in boring meetings talking about procedure. Instead let’s have lively political meetings in
every ward and every constituency. Let’s make sure that every constituency has a campaigner speaking at it – from Orgreave, the black-list lads, the kind of people we as members and activists we should be engaging with. I’m no great believer that Jeremy
Corbyn the messiah, just cause his initials are JC. The thing is, if we are going to change
society it needs a movement behind him. We need committed socialists at every level of our party. I’m optimistic because of all the people who have flooded to our party that we are going to do it. We are going to change society. We are not going to tinker around the edges. Let’s face it John McDonnell is right when he says within a few days of a socialist
Labour government they will come for us. The only thing that can defend us is our movement.”