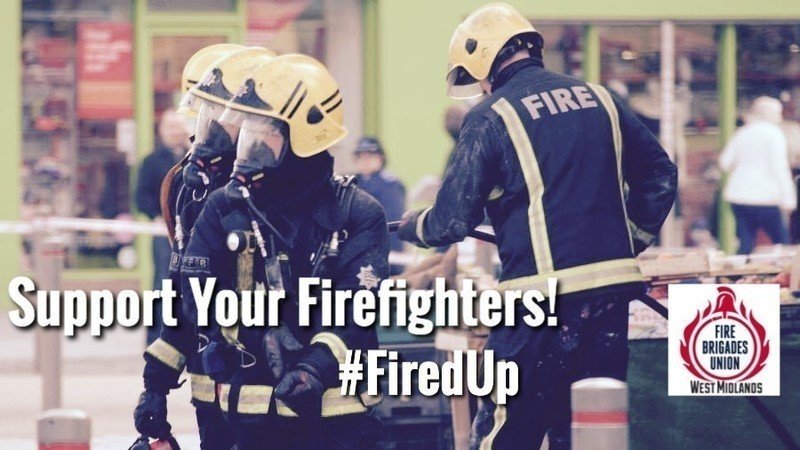 Reproduced below is the FBU’s statement announcing its members in the West Midlands will be balloted for strike action over the imposition of new contracts. These contracts, imposed by the Labour led fire authority, would create a two-tier workforce.

Firefighters and emergency control operators in the West Midlands will ballot for strike action in an escalating row over the imposition of new contracts, the Fire Brigades Union (FBU) has said today.

Contracts introduced by West Midlands Fire Authority mean new firefighters entering the service will have to take on work outside the agreed role of a firefighter. The contracts would allow the employer to unilaterally change the work of firefighters at any time breaching nationally negotiated agreements with the union. The FBU has demanded the contracts be withdrawn immediately.

The news comes amid growing tensions between firefighters and the fire authority over a number of issues including the imposition of non-fire service work, dictatorial management practices and interference with day to day trade union activities. Union reps have been threatened with discipline for conducting health and safety investigations as they are entitled to do under the law.

Andrew Scattergood, chair of the FBU in the West Midlands, said: “The new contracts give management an unhealthy amount of power to dictate the work firefighters do. The so-called ‘Labour led’ fire authority is creating a two-tier workforce between those who are contracted to do any work and those who have contracts that the public would expect a firefighter to have. It is a classic divide and conquer strategy.

“Firefighters are not only angry at the contracts being issued, they are gravely concerned about the management culture where staff are routinely ignored and their concerns dismissed. Our members do not want to take industrial action but they cannot and will not accept a two-tier workforce. It is not the right of management to change contracts on a whim.”

Matt Wrack, general secretary of the FBU, said: “Strike action is always the last option that any firefighter wants to take but sometimes it is necessary. Firefighters in the West Midlands have made it absolutely clear that these contracts are unacceptable. Senior managers at the service need to think long and hard now if having firefighters out on strike is in their interest. The political leadership of the fire authority needs to get a grip and step in before strike action takes place.”

West Midlands Fire Service is branching out into other lines of work in an attempt to generate income. However, the FBU says new areas of work have cost the service more than has been generated.

The FBU aims to start the ballot for strike action in the week beginning 30 April.

For more, check #FiredUp on twitter, and watch West Midlands FBU Chair Andrew Scattergood explaining why the issuing of new ‘flexible’ contracts could put the public at risk:

The Clarion editorial board sends its solidarity to West Midlands firefighters in their ongoing struggle.