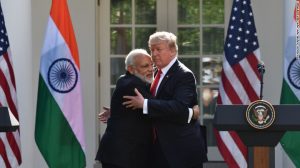 In the print version of this article the word untouchables, in quotes and brackets, is used to describe Dalits. This word was not in the text submitted by the author. We recognise that this is not acceptable language to use in discussing oppressed castes. We regret the error.

While refusing at first, in the wake of the Windrush scandal, to meet with the leaders of the 12 Caribbean nations who were here for the Commonwealth  Heads of Government Meetings, Theresa May did meet with prime minister Narendra Modi, an important ally, at Downing Street ahead of the Commonwealth meetings.  Immigration of “educated skilled Indian migrants” and India’s insatiable appetite for weapons systems and arms and its large markets for trade penetration by the UK, especially post-Brexit, could be on the table for discussion.  India is being viewed as an emerging superpower in the south Asian subcontinent and a counter to China’s dominance.  And therefore this Hindu fascist leader, avowed admirer of Hitler, is now being feted in European capitals. For Tory Britain, Modi’s full endorsement of the Trump administration and the special links he has made with Israel, abandoning India’s traditional support for the Palestinian cause, are also possibly significant factors. India is the largest purchaser of Israeli arms.

Modi, whose political career began within the RSS, a two million strong Hindu fascist movement, and is still beholden to them, as the ruling party the BJP was also born out of the womb of the RSS. Under his reign, mob lynchings and mass killings of religious minorities, especially Muslims, have been set in motion. The Hindutva ideology that the BJP espouses also targets Dalits, who were already marginalised but are now being murdered by “sacred cow” vigilantes.  Dilution of  legislation offering protection to Dalits is also on the cards.

Journalists have been silenced, indeed murdered, and prominent human rights defenders, hunted. University and school text books are being altered to reflect a Hindutva view of Indian history, with independent academics and students, targeted. The latest is that the judiciary is being heavily leaned on to acquit Hindutva perpetrators of terror.

One of the biggest targets of this rising Hindu movement is women, where BJP and RSS politicians rape and assault women, especially women from minority and Dalit communities, with impunity. The rape of a 16 year old girl by a BJP parliamentarian in Unnao, Uttar Pradesh, and the subsequent murder of her father for seeking justice; and the gang rape and murder of an eight year old from the nomadic Bakarwal Muslim community in Kashmir, as punishment for not allowing the BJP and Hindutva stalwarts to take away their land – both are being publicly defended by BJP ministers. Hindutva activists and lawyers in Kashmir have defiantly protested the prosecution of the accused, have blocked court houses, and defended the rapists.

Modi was deathly silent until mass protests broke out. Modi is presiding over this reign of rightwing Hindutva terror against Muslims, Dalits, dissenters and women, at a level of impunity  never seen before.

The Hindutva movement has taken root within the Indian-origin Hindu community in the UK, with the full backing of Tory politicians such as Priti Patel and Bob Blackman of Harrow East,  who wishes the anti-caste legislation now in the statute books in the UK not to be implement.  Labour activists must mobilise to oppose such politics. 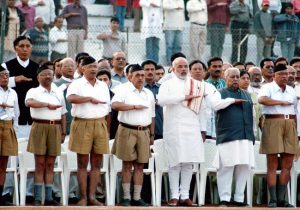 Modi has strong links to the fascistic RSS organisation