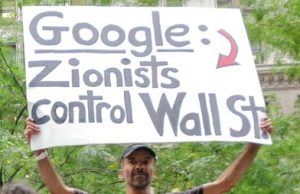 The problem of antisemitism in the Labour Party is being exaggerated – but that does not mean there is no problem to deal with.

Antisemitism in the Labour Party and on the left is not just a matter of Labour and the left being affected by wider antisemitism in society. As Jeremy Corbyn has rightly pointed out, there is a specific form of “leftwing” antisemitism which has aptly been called – originally by Germany’s socialist leader August Bebel – the “socialism of fools”.

This is the idea, which proliferates on the fringes of the left, that working people suffer because of the manipulative, conspiratorial and personal power of shadowy international elites with direct control of the media, finance and (some) governments. Even where these elites are not openly labelled Jewish, there is often reference to e.g. the Rothschilds or the “Zionists”. Not all conspiracy theorists are antisemitic, but such politics provides a culture medium for the growth of antisemitism.

Conspiracy theory-type politics are incompatible with working-class socialism. Socialism blames exploitation and oppression not on conspiracies but on the observable and analysable structures and mechanisms of capitalism. “Conspiracies” by the rich and powerful take place on the basis of that exploitation – not the other way round. Socialists respond by seeking to organise workers of all backgrounds and origins, across all divisions and borders, to fight exploitation and oppression together.

Through political education, argument and struggle, we need to purge the left of all vestiges of conspiracy theories and strengthen it with a healthy dose of class-struggle socialism.

Immediately, in and around Labour, antisemitism has to be taken seriously and challenged. Jewish people concerned about it need to be listened to, even when we disagree with their politics – as we would do with any other oppressed group.

A wider problem on the left than out-and-out antisemitism is people who do not want to tackle the issue. Sometimes this takes the form of simply refusing to engage one’s brain – as we seemed to be the case with fallen NEC member Christine Shawcroft recently. The media onslaught was instigated by the digging up of an old story from 2015 about Corbyn’s defence of an antisemitic mural in 2012. What that illustrated was at least a blind spot, as to any serious observer that mural was clearly antisemitic.

None of this is to deny that the issue of antisemitism has been manipulated and exploited cynically to attack the left – by the right-wing press and the Tories but also by some on the right of the party. There is self-evidently a concerted campaign to undermine the left. Some of the cynicism is quite breathtaking, with the likes of Chuka Umunna and Yvette Cooper going on demonstrations alongside Tories and DUPers to denounce Corbyn, when they refused to say a word against Ed Miliband being subjected to a series of Jew-baiting attacks (his dad was a traitor to Britain, he couldn’t eat a bacon sandwich, north London intellectual, etc…) Right-wing MPs like John Woodcock denouncing left-wingers Jewdas as the wrong kind of Jews was also appalling.

We have nothing to learn from those responsible for the shameless anti-migrant and anti-Muslim bigotry of the New Labour years, which has fundamentally poisoned British politics ever since.

The left should be proud of our anti-racist traditions. Socialist and trade unionists fought alongside the Jewish community at Cable Street to defeat Oswald Mosley’s Black Shirts, while the Daily Mail defended them. Corbyn and many other leftists have an honourable record of opposing racism.

Nonetheless our response should not limit itself to the defensive or match cynicism with cynicism. We must engage with the issues of antisemitism and how to fight it seriously.

The problem here is fundamentally political. It will not be solved by disciplinary measures. Explicit and unrepentant antisemites should be expelled (though there must be the possibility to rehabilitate people); but we must oppose attempts to further strengthen the Labour bureaucracy’s power over the rights of members. We continue to demand due process for all and an end to factional use of the disciplinary system. We fight for the Chakrabarti recommendations to be implemented. What is needed is not just getting rid of a few bad apples but a much wider political process of discussion and education about antisemitism, as well as about the nature of capitalism and socialist politics.

A fighting Labour Party, a revived labour movement and a renaissance of socialist politics can provide invaluable allies to all the oppressed. But to create these things the left must be radically strengthened and developed, including by putting its house in order on antisemitism.

The sound and fury will die down. As they do we must increase the light being shed on the issues, not led it fade.