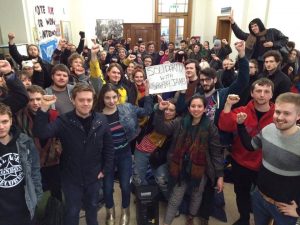 Before the general election, Owen Jones earned the dislike of many Corbyn-supporting activists by his panic and equivocation in the face of the right-wing backlash against the Labour left.

Some might interpret his left turn since the election as an act of opportunism. I’m not convinced that’s fair. What do I know, but it looks to me as if the election result genuinely surprised Jones and gave him some new or renewed political confidence.

Since then two things have impressed me about him. The first is a willingness to roll up his sleeves and throw himself in to help build the movement, mainly in terms of mobilising people for election campaigning but also for instance in support of the Picturehouse strike and student struggles. In this respect he stands out from many left-wing journalists and commentators. He also stands out in now amicably but clearly criticising Corbyn not from the right, but from the left, saying many things that need to be said but few if any prominent people in the movement are saying.

Nationalising the banks, free movement, Trident, taxing the rich, restoring all benefits, a four day week… Jones has repeatedly been willing to use his soapbox to promote left-wing ideas outside the Corbynite consensus or stick up for ones Corbyn has let slide. (This in addition to generally progressive and admirable positions on wider political issues such as the Kurdish struggle, trans rights, anti-semitism and Stalinism.)

Moreover, he has theorised this stance. Think Corbyn and McDonnell are radical?, he wrote in the Guardian. “I say they aren’t radical enough.” The party’s plans are “too moderate the meet the growing series of challenges facing British society… Labour needs to be more ambitious… the danger is that the Labour leadership is seen as the most radical flank of acceptable opinion… with limited space for them to be more radical.” Moreover, to shift the political consensus even further: “There needs to be more assertive voices demanding greater radicalism than that offered by Corbyn and McDonnell”.

Very good indeed! And yet at the same time, Owen Jones has been and remains a 100pc supporter of a Momentum leadership which has repeatedly denounced the idea that Momentum should develop policy or push Corbyn to the left as a disaster for the movement; and was so terrified of this happening on any scale that it spent a year fighting (ultimately successfully) to shut down democracy in the organisation – with Jones’ vehement support…

Shortly before Jon Lansman’s coup against Momentum democracy, Jones wrote a dire article, abusing his Guardian slot to wildly denounce Momentum activists and paint a bizarre fantasy picture of the issues at stake in the fight going on. In this year’s Momentum national coordinating group election, he provided public support to the coup plotters’ slate.

I can understand what Jones’ motivations might be. I’m sure he sees the far left as a disaster zone, and in some respects, with regards to some of the far left, he is right. The fact remains, however, that the “alternative” he has backed is committed to keeping Momentum members thoroughly subordinate and Momentum a safely controlled, cautious and conservative organisation.

All the pushes to radicalise Labour policy over the last two and a half years, for instance on the NHS and anti-union laws, have come not from Momentum, but from more radical groups operating within or on the fringes of Momentum – with at the very best mildly friendly indifference from the hierarchy. Momentum functions as a Corbyn fan club, but on the crucial issue of migrants’ rights and free movement is has stood not to the left but to the right of Corbyn. It has done a few bits to support grassroots struggles like strikes, but is largely indifferent to them, even when pushed. It failed to oppose, and now effectively supports, purges of socialists.

What is most important politically is not the incoherence and hypocrisy involved in Jones’ contradictory stand – which is very far from his alone, though he embodies it in particularly striking form. What is important is the wider political question. How can “more assertive voices demanding greater radicalism” from the leadership and from the labour movement become a force when the dominant organisation and dominant leadership of the Labour left are at best indifferent and at worst deeply hostile to the development of such voices? That is a question that urgently requires thinking about and discussion.