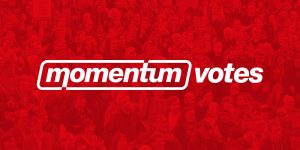 In the second elections to Momentum’s National Coordinating Group (or more accurately, the minority of places actually elected by members, a total 13,307 people — 35pc of members, about the same as last year — cast 50,410 votes.

23,054, 45.7pc, went to the leadership or office slate, led by Jon Lansman, on which basis they won 10 out of 12 places (it is a first past the post system, and one split into three giant pseudoregions, making it even more winner-takes-all).

Radical left Clarion-backed candidates got 9,700 votes or 19.2pc, even though there were only eight standing, against twelve “Lansmanites”. One, Yannis Gourtsoyannis in the London/SE region, was re-elected. Tracy McGuire, in the Northern region, came very close to being elected. In general the candidates we backed got respectable votes, between 936 and 1,316 each (Yannis got 1,822). They were the main opposition candidates.

Michael Chessum, who sat on the old Momentum Steering Committee and was a left candidate for the NCG in the London/South East region this time, comments:

The outcome was a heavy win for the establishment slate, on which Jon Lansman himself ran. In only two seats did anyone break the dominance of this slate – with Yannis Gourtsoyannis, a leader of the Junior Doctors’ strike, winning in London, and Liz Smith, an independent activist, winning in the North.

By way of analysis, it’s worth bearing in mind four things.

First, the winning slates were effectively the official Momentum slate in the Momentum elections – and it was seen as such. When campaigning online, I repeatedly heard members say “oh no – I’ve already voted for the Momentum slate, sorry”. Having been at the helm of the organisation during a period of growth, the leadership slate made hay, including for work which was of course done by staff, volunteers and the grassroots.

Secondly, they had a much better machine. From day one they had memes, a suspiciously well-liked page (more on that below) and a website with a lot of content. They also lined up celebrity endorsements in advance which were impossible to match. The way the official slate presented endorsements was very clever, as well. Endorsements from one ‘big name’ (for instance John McDonnell’s endorsement of Lansman) were presented as support for the entire slate.

Thirdly, the leadership faction positioned itself on top of “opposition” terrain – promising to do things they had opposed weeks before. Incumbent NCG members tell me of being told off for producing public reports of NCG meetings – but the official slate promised even more of them. Some of the slate’s content stated that Momentum should “go beyond” backing Labour and back extra-parliamentary struggles as well – precisely the thing that we have been fighting for it to do, and precisely what its leadership has always soft-pedaled or opposed.

And finally, they made use of Momentum resources. The online hub for the leadership slate – “Momentum for the Many” – was in fact the repurposed Facebook page of the organisation’s official youth wing, whose audience was built with Momentum’s logo and advertising money.

Not all of these factors are inherently wrong – you can’t avoid some incumbency bias, and there’s nothing wrong with slating. But we do have to look at Momentum’s structures if they can be so overwhelmingly dominated by one faction in what is supposed to be the hub of a pluralist movement. Then again, that was sort of the point of them when they were introduced.