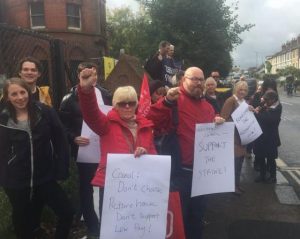 By Sacha Ismail, Lewisham Momentum co-secretary and Clarion editor. These notes were written for a discussion organised by the New Economics Foundation

When they bid last year to redevelop Ladywell Playtower in Lewisham, poverty-paying, strike-breaking Picturehouse Cinemas had a lot of advantages on their side – not least massive name recognition. Many Ladywell and other Lewisham residents will regularly attend the Picturehouses just either side of the borough in East Dulwich and Greenwich. Unsurprisingly then, the council’s consultations showed strong support for Picturehouse (though when you factored in second, third and fourth preferences it was much less clear). A prominent Ladywell small business association backed them. Moreover there clearly were some advantages to their proposals.

The vibes coming from the “moderate” Labour leadership of Lewisham council were not very encouraging either. To make it worse the decision was to be made by the executive mayor, not the whole council.

In the end, Lewisham Momentum’s campaign to prevent Picturehouse winning the bid succeeded. Curzon Cinemas got the gig; Picturehouse was not even made the back-up option if Curzon fell through. Here are some of things we did.

1. Our Momentum group, particularly a number of central activists within it, was already keyed into the Picturehouse dispute and had done quite a lot of solidarity work around it, so there were people who were ready and motivated to jump in when the Ladywell issue arose. We moved fast and energetically.

2. We talked about it a lot, insistently and everywhere we could. We were polite but argumentative with Labour councillors.

3. We worked with a group of more left-wing councillors, who did some things to raise the issue within the Labour group/council.

4. We refused to allow the issue to be reduced to the technical matter of the wage rate, as if everything would be fine if only Picturehouse paid slightly more – which is the tack many councillors and other Labour “moderates” took. We stressed that this was a case of a strike/strike-breaking and emphasised the issue of the sacked reps and basic labour movement solidarity.

5. On one hand, we refused to enthusiastically endorse a rival capitalist corporation to get the contract; on the other, we did not hesitate to point out repeatedly that if people wanted a cinema (which is much needed in Lewisham) Curzon at least pays the Living Wage and recognises BECTU.

6. We coordinated submissions to the council’s official consultation, producing a model submission and running a social media campaign around it.

7. More generally we made extensive use of Momentum’s and in so far as we could other organisations’ social media.

8. We set up an online petition on Change.org which slightly to our surprise snowballed (to over 8,000 signatures). It became central to the campaign and got a lot of publicity for it.

9. However we also organised events in the real world – two lobbies of the council, the second one the night the decision was finally made. At the first lobby, after we learned that the decision would not be made that night, we insisted on a picture with the Deputy Mayor receiving our petition which we then put round widely (we also used the opportunity to push him). We also organised a separate protest at Ladywell Playtower one Saturday lunchtime which we turned into a good photo op.

10. We made extensive use of our involvement and links in the local Labour Party, and to a lesser extent unions. This included a statement signed by over a hundred local Labour Party activists/officers (to be honest we could have done a lot more to get signatures on that) and motions through some wards.

11. We kept Picturehouse worker activists – reps, people working for BECTU, and activists we knew more informally – informed of and consulted them about what we were doing, sent them stuff to share/promote, circulated a briefing they wrote replying to Picturehouse’s propaganda, and had some of them along to protests and to speak at meetings.

12. We raised the issue as much as possible outside the borough so that the council/cabinet/mayor would feel all eyes were on them.

13. When we won we followed up by getting a motion passed through the Labour group and then the whole council welcoming the decision, attacking Picturehouse’s strike-breaking and expressing solidarity with the workers.

14. We have tried to make links with workers in Curzon – a work in progress.