For analysis of the election results, see here

The second elections for Momentum’s National Coordinating Group (or rather for the minority of places on it actually elected by Momentum members) close tomorrow, 16 April. There are slates supporting the Momentum ‘office faction’, led by Jon Lansman, running in all three regions and it looks like they will do very well, possibly even sweeping all twelve places. Of course, the bizarre electoral system, with three giant pseudo-regions rather than a single multi-place election, is designed to facilitate such winner-takes-all results.

Last year, in the aftermath of Lansman’s/the office’s coup against Momentum democracy, the office faction was caught off guard and lost a quarter of the places to the radical left, coming close to losing more. This time they have taken no chances, running a very extensive and vigorous campaign which has included endorsements from big names such as Paul Mason and Owen Jones. The old, thousands-strong Facebook page of Momentum Youth and Students – which Lansman shut down because it was discrediting Momentum! – has been converted into a propaganda engine for their slates. 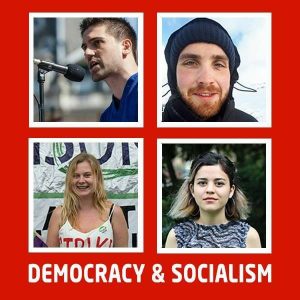 In addition, many critical left-wing activists are quite disillusioned with Momentum and not very enthusiastic about engaging with its extremely limited democracy. This is particularly the case since the NCG has not really functioned over the last year – decisions have been taken by a small group around Lansman and by the office, using the NCG as a cover, with pretty minimal pretence otherwise. However, despite this disillusionment among activists, Momentum’s membership has grown substantially, with the result that there are many more members who have never been to a meeting or engaged in the organisation beyond joining and clicking. This obviously creates favourable conditions for the biggest names to win, particularly when they are backed by even bigger ones.

Despite the shockingly undemocratic way Momentum is run, and the conservative politics which underlie this, The Clarion continues to believe it is an organisation socialists should engage with and organise in. We hope that some more critical and radical left voices, such as Clarion editors Daniel Round, Michael Chessum and Sahaya James, are elected. But the case to engage with Momentum will not disappear if Lansman and co. have succeeded in stitching up its supposed highest body even further.

• If you read this before 16 April and haven’t voted yet, vote Yannis Gourtsoyannis, Sahaya James, Ruth Cashman and Michael Chessum in London/South East; Daniel Round in East/West/Midlands, etc; Tracy McGuire, Ed Whitby and Camila Bassi in Northern, etc.