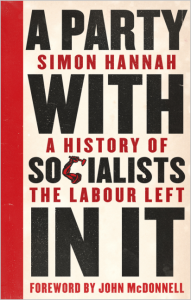 Clarion editor Simon Hannah recently published A Party with Socialists In It: A History of the Labour Left (Pluto Press). For issue 14, he discussed the book with Martin Thomas.

Martin: The book is a story of the left losing again and again. Why?

Simon: The fundamental reason is that the ideas of a socialist Labour left cannot be realised in the Labour Party as it has been historically constituted. So Labour left movements have made some gains, but they always come up against the weight of right-wing union leaders and MPs, and the impasse of trying to reform capitalism through the existing state.

Some strands of the Labour left, sometimes, have seen that and worked to reshape the Labour Party, rather than accepting it in its existing “historically constituted” shape.

The left has generally been the transformative wing of the Party. The left-wingers want to transform power relations and socio-economic conditions. The high points for that sort of effort were the Socialist League in the 1930s, and the Bennite and CLPD movement in the 1970s and ’80s. Compared to them, the Bevanite movement of the 1950s was not so advanced.

Yet you give more space in your book to the ILP [Independent Labour Party, founded in 1893, a big autonomous subsection of Labour from 1900 to 1932] than to the Socialist League, which was a sort of dowager of the ILP.

The ILP predated Labour. The experience of being in Labour in the 1920s pushed to the left. That led to the ILP leaving the Labour Party in 1932. The Socialist League was based on the wing of the ILP which stayed in Labour.

It too failed, ultimately. It did get some good policies through Labour Party conferences, like nationalisation of the banks in 1932. But the Socialist League was never more than a network of intellectuals and a few worker activists. As soon as the Labour Party NEC [National Executive] told it to shut itself down in 1937, it did that.

And, considered as a transformative force, the Socialist League was also vitiated by succumbing to the influence of Stalinism.

Some Socialist League leaders – Cripps, Laski – saw themselves as quite influenced by Marxist idea, but for them, then, that meant moving into the orbit of the Communist Party of Great Britain. After about 1934, the Socialist League, failing to secure internal reforms in the Labour Party, turned more to external campaigning, in which it worked with the ILP and the CPGB. Yes, it was politically weak.

You mentioned the Labour left of the 1970s and 80s as another high point. I was surprised at how positive an account you gave of the Labour left “Alternative Economic Strategy” of that period. That again was influenced by the neo-Stalinist CPGB, and Marxists at the time thought it was rubbish.

It was a high point of the Labour left in that it established ideas of political economy which offered an alternative to mainstream Labour thinking and included, in Stuart Holland’s writings for example, criticisms of old-style Labour corporatist thinking. But insofar as that AES was adopted by the Labour Party, it was never implemented. It was a national proposal which lacked grip on the international crisis of capitalism.

The AES left was routed in 1975-6 when it was defeated in the European Union referendum in 1975 – leaving the EU was always the AES’s first-line, most practical proposal – and the Tribune MPs voted for cuts in 1976 after Wilson made it a vote of confidence. But then a few years later, in 1979-80, the left revived, and focused much more on transforming the party itself.

The left turned to institutional reform because it was so horrified by the failure of the 1974-9 government, which had come to office on a radical manifesto and then failed completely. The left wanted to make the Labour Party more accountable. In its own terms that fight was quite successful.

But then you had a paradox. The Labour Party had carried through big democratic reforms, it had a left-wing leader, it had left-wing policies, but it crashed, because the full transformation didn’t happen, and the unions were defeated.

The Bennite movement of the 1980s at its best did cross over the divide between the Labour Party and the unions. That is a scandal in terms of traditional Labourism, where it’s ok to have a Labour left, and even ok to have some rank-and-file movement in unions, but the combination of the two is too dangerous.

Politically the Bevanite movement said little more than go back to 1947, continue on the lines laid down there, but do it better. The Bevanites saw Labour as moving to the right, and wanted to keep going in what they saw as the 1945-7 direction. Bevan had no critique of the nature of the 1940s nationalisations.

But the Bevanites were seen as an existential threat by the Labour Party. The Parliamentary leadership clamped down on dissident MPs, and CLPs like St Pancras were shut down and reorganised. Maybe we should say: a one-sided civil war.

You had there a pattern which we saw again in 2015: a long period of successive victories for the Labour right, and dwindling of the left, was followed by a sudden revival of the left – at that time, the unilateralist revolt, and the burgeoning of a left-wing Young Socialists movement.

Despite all the problems of the Labour Party, it still can be seen as, and sometimes is, a vehicle for people to fight back. That seems to happen in cycles. One reason why I wrote the book is to help people realise that the revival of left reformism and of hope in social democracy has happened before. We can learn from previous cycles.

The Corbyn movement emerged from the crisis of neoliberalism, from revolts against austerity, and from a loosening, to a degree, of the stultifying grip of the bureaucracy in the trade unions. Those factors created an opportunity which people seized.

Your book gives little coverage of the Marxist strands in the history of the Labour left – the SDF and BSP before 1918 (the SDF, in fact, remained active within the Labour Party right through from 1900), and the pre-Stalinist Communist Party and the National Left Wing Movement in the 1920s.

I wanted to look at the elements of the left which had the biggest impact on Labour policies, and so, for example, the ILP in the 1920s. Militant also had an impact in the 1970s and 80s.

I thought your coverage of Militant blurred over their decisive capitulation in 1984, when they had Liverpool council accept a deal with the Tories to postpone its financial problems to the next year so that the Tories could evade a fight on two fronts, miners and local government.

Yes, taking Militant to task on their myth-building is quite important. But I focused in the book on the “rate-capping” battle in 1985 because that was the last hurrah of the AES left wing. The AES had been blocked at national level, and a section of the left thought they could use local government to implement sections of the AES.

You could see that in Lambeth, for example. In 1978, when they still had a Labour government, the left-Labour Lambeth council saw its task as getting central government money to create jobs and social provision locally. After the Tories took office in May 1979 that shifted.

The first shift by Ted Knight and the Lambeth council leadership was to go for cuts, in early July 1979. The local Labour Parties forced them to reverse those cuts. But the rate-capping battles of 1985 were essentially a clumsy bit of theatre after the local government left had already capitulated on the idea of using its bases in the councils as a platform for battle to oust the Tories, alongside union struggles.

My next book will be about Lambeth council in the 1980s.

How does today’s Labour left, in Momentum, measure up against the lessons of the past?

Momentum needs to be much more political and educative, and not afraid of debating big ideas. Politically the Labour left is very uneven. It has some people who are very knowledgeable, but little collective discussion.

Over history, Labour lefts have never fallen apart because of educative debates. They have fallen apart because they have been defeated. Even when political debates have caused splits – as the argument over rate rises did in 1979-80, for example – those splits have not stopped components of the left working together. On the other hand, we want to avoid people being unprepared when we get a left Labour government and face struggles as a result.