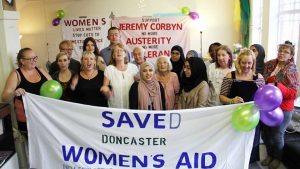 Women’s Lives Matter is a non-party group of grassroots campaigners who first came together when Doncaster Women’s Aid was under threat of closure.

We came together again in 2017 when the service born out of that campaign, South Yorkshire Women’s Aid, was told they’d no longer receive funding.

Through campaigning we got in touch with other women’s rights activists and campaigns. We became increasingly aware of other women’s centres, refuges and women’s medical services, eg the Liverpool Women’s Hospital Campaign. We were pleased to make these links but there was a lack of a platform to share experiences, techiques and support. That’s why we came together to hold our first Women’s Lives Matter meeting.

The panel included DPAC, Save Women’s Aid, the Liverpool Women’s Hospital Campaign and the Durham TAs. We had contributions from Barnsley Save our NHS campaign and from young Muslim sisters. This year’s we’re aiming to hold another “umbrella” meeting, but make it bigger and a day long event, more like a conference – that will provisionally be on 9 June. We’re hoping to make links more widely, eventually across the UK.

We continue to focus on winning ringfenced funding for domestic violence support services and refuges, but we are also trying to raise awareness of issues like Yarls Wood.

We are a trans-inclusive campaign. We are very clear about that on our campaign materials. We had a bit of discussion about it, but it didn’t last long and there was a strong consensus. Women are women. People who identify differently from the body they were born with are not our enemies; our enemy is a class enemy.

We are non-partisan – some of us are members of the Labour Party and some aren’t – but we are very outspoken about being a pro-Corbyn organisation. When we’re doing public events or speeches or visiting other women’s groups, we talk about the need for the country to be governed by a Corbyn-led Labour Party. That’s the only hope for women of our class to see positive change.

We have a lot of support from local Labour Parties. My CLP, Sheffield Heeley, voted unanimously to support the campaign. I was surprised it was unanimous. Momentum Sheffield supports us too. The first official Labour organisation to give support was the Leeds Women’s Forum, they’d seen what was happening on Twitter. It so happened we were having a very difficult day, we felt tired and struggling, and then there was this ray of sunshine when these women sent through a picture with home made signs supporting us. We’ve had a lot of support from unions, local branches but also some national unions. Also some prominent individuals: for instance Ken Loach did a fundraiser for us.

Some individuals in the Green Party but not the party as such, which surprised me. And also we’ve been disappointed by the lack of support from some prominent left-wing Labour and union figures in the region.

Obviously much of our campaigning is around Labour councils, in the first instance Doncaster. Our general view is that councils should be doing more to stick to the anti-austerity line of the leadership. Not long before we heard South Yorkshire Women’s Aid was having its funding withdrawn, Keir Starmer made a statement about the importance of women’s refuges and DV services and Labour’s commitment to supporting that.

Doncaster has £8-9 million in reserves and we were asking for £30,000 for the service, so it’s a big question why they don’t concede that. The council’s own domestic violence services are nowhere near adequate to deal with the huge volume of domestic abuse incidents in the area, 6,500 last year. Often cases are referred to Women’s Aid for that reason, so this makes no sense.

Beyond that, many of us would be in favour of setting no cuts budgets. If a number of Labour councils were willing to stand together they could defeat the government. Strong union support would be crucial.

• Search “Women’s Lives Matter” on Facebook. Jennifer writes as a campaign activist and not on behalf of South Yorkshire Women’s Aid.