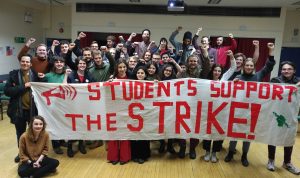 Around 40 activists from 13 campuses who had been in occupation came together on Sunday 18th March to share experiences, learn from each other and plan how we can unite in support of UCU for the struggle ahead.

After a hugely inspiring four weeks we had a collective discussion of the national situation. Swansea UCU activist Cath Fletcher gave an overview of the recent history of the UCU and the context of the strike, and Cambridge postgraduate teaching assistant and UCU member Dan Davison spoke of the effect of the 2010 student movement on his current involvement in the occupation at Cambridge University.

National Campaign Against Fees and Cuts activist, Clarion editor, Momentum NCG member and NUS Presidential candidate Sahaya James, who played a key role in the occupation at UAL and UCL called for the National Union of Students to orientate itself towards the emerging leadership of the student movement: the grassroots activists who have made the last four weeks as significant as they have been.

This comes in the context of the largest wave of student occupations and direct action since 2010. So far, 23 campuses have occupied in solidarity with UCU, with the largest wave coming last week after UCU rejected the awful deal being offered by Universities UK.

A different character to 2010

In 2010, the occupations and direct action were a reaction to the rise of tuition fees and included many school students angry that they would personally face the effects of the Government’s policy.

The current revolt has largely different backbone. While some students have cited their desire to go into academia as a reason for their current protest, for the vast majority of the thousands of students are acting because of an ideological commitment to the abstract notion of student-worker solidarity.

Emboldened by the confidence of UCU in calling its largest ever set of strikes, this mass action has been politically educative for large groups of students who understand that students and workers are on the same side against the Government and UUK.

The task for the students who have been involved in the action so far is to turn ourselves outwards and inspire many thousands more to join with us and staff.

If we organise collectively, this wave of occupations and this strike could provide the spark for a mass student movement against marketisation in this country. Such a movement, focussed on democratic organising, political education, worker solidarity and direct action can achieve great things. It can provide the bottom up pressure that helps to turn the excitement over Labour’s free education policy into reality. And it can provide the basis for a student movement with genuine links to workers’ struggles on and off campus. This would not only bolster these individual struggles, but educate a new generation of future workplace organisers.

While we should always take care to be grounded and not slip into wishful fantasy, it is the case that the potential here is huge and we should be ambitious in our goals.

Ultimately it is up to us to do the groundwork to make this happen. Already, further occupation summits are being planned for London and Scotland campuses. It should be the collective goal of student activists to help bring together this movement and foster as much national cohesion as possible, through demos, days of direct action and occupations.

What have Labour and Corbyn got to do with this?

Indirectly, the huge excitement that the Labour Party fostered around its free education policy in last year’s elections has led to many campuses having a much larger group of politicised and broadly left wing students than we have seen in decades. It’s important that this is factored in when we ask ourselves why so many students have suddenly been willing to take an active role in solidarity for this strike.

However, solidarity action has in the vast majority of places not come as a result of organisation by or through Labour clubs and societies.

Additionally, the lack of high-profile support for these strikes from the Labour Party leadership has also been noticeable. Why has Corbyn not been visiting picket lines? Or joining roving pickets? Why has Labour not called a national demonstration in support of this strike, which could have galvanised tens, if not hundreds, of thousands?

This strike has shaken national politics. Labour should see itself as a the vehicle for translating the upsurge of struggle here into a national movement that can make the difference in catapulting it into Government and implementing its free National Education Service.

Finally, it’s important that we see our role in making that happen. Let’s get policy in support of the strikes passed through our local Labour branches and CLPs. Sometimes, the leadership will just slow as it is now. Let’s shake it into action from the grassroots level up. 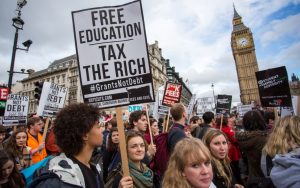