This term has seen the biggest surge in student activism in years.

When Universities UK announced changes to the USS pensions scheme, threatening a cut of around 40%, thousands of students mobilised to support their staff on strike.

Across the country students turned out en masse to picket lines, teach-outs, demonstrations and, occupied over 20 campuses.

This follows other impressive campaigns led by students in the past year: a number of successful rent strikes in university halls, a campaign against pay inequality in Bath led to the UK’s highest-paid Vice Chancellor stepping down, and students at UAL went into occupation to protest their university’s complicity in gentrification – to name just a few.

John McDonnell addressed a 300-strong picket line at Goldsmiths and Richard Leonard even visited an occupied lecture theatre in the University of Edinburgh.

It’s not new that established figures of the Labour left show support for the student movement: Corbyn and McDonnell were both vocal advocates of the 2010 protests against tuition fee rises, were present at the UCL occupation and have spoken at countless student demonstrations ever since.

The difference, of course, is that now they are leading the party.

This, unfortunately, cannot be said about the leadership of the National Union of Students. Just as Labour inspired millions with its manifesto pledge to scrap tuition fees and create a cradle-to-grave National Education Service, the new NUS leadership shied away from even mentioning its policy on free education,

Instead of harnessing the power of the mass of students who enthusiastically voted for a debt-free future, NUS focused its energy on lobbying for a seat on the board of the Office for Students.

In November, when a thousands-strong demonstration demanding free education and living grants funded by taxing the rich, Corbyn filmed a video encouraging students to join the march – NUS President Shakira Martin undemocratically ruled out a motion to support it from being heard at an NEC meeting, and wrote a Facebook post complaining that footage of her at a previous protest appeared in said video for a split second!

When senior Labour figures were visiting picket lines and occupations, Martin dismissed occupations as a sign of privilege. 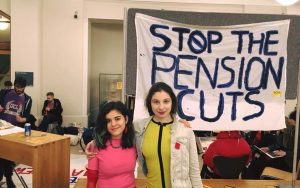 Sahaya James and Ana Oppenheim in occupation to support UCU

These are just some of the many examples of the growing disconnect between the national leadership and activists on the ground. By the time National Conference arrives, it is likely that more students will have slept in occupations than will show up at Glasgow’s SEC centre.

When education is under fierce attack from the government and greedy Vice-Chancellors, we need a robust movement to fight back.

At a time when student activism is thriving again and leftwing ideas are gaining ground across society, a radical national union could offer immense opportunities.

With its multi-million budget, millions of members and access to media platforms, NUS could be throwing its weight behind meaningful campaigns and pushing our movement forward instead of lagging behind it.

It could pose a serious challenge to the Tories and university bosses, and put forward visionary policies that expand our conception of what is possible.

This is why I’m standing to be NUS’s Vice-President Higher Education, and backing other candidates who are part of the Corbyn surge. In particular, I’m campaigning for Sahaya James, an activist with the National Campaign Against Fees and Cuts and Momentum NCG member – and Clarion editor! – who is standing to be National President.

It is time for our union to reconnect with its grassroots and prove its relevance to the students who are mobilising and winning on their campuses.