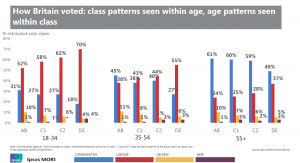 (This article was written shortly after the general election but not published. The author has slightly updated it so we can publish now.)

“Not so long ago”, wrote the Financial Times shortly after the 2017 general election, “class was the starkest dividing line in British politics… In the October 1974 general election… the middle classes were 40 points more pro-Conservative as the electorate as a whole, and the lower working classes were 32 points more pro-Labour: a total partisan gulf between the classes of 72 points. But fast forward 43 years to today and the gap has plummeted to just 15 per cent”.

And worse: according to the same polling the FT cited, by Tory guru Michael Ashcroft, among “skilled working class” voters the Tories beat Labour by 5 points in 2017, 44-39. In 2015 the main parties drew among this group. In 1997 Labour beat the Tories something like 50-27.

So it seems that even as the Labour has recovered, its support has become less working-class. Is that right?

The first thing is to understand what these categories refer to. They are not the products even of bourgeois social science, but of the marketing industry. According to this scheme, originally associated with the National Readership Survey and now maintained by the Market Research Society, society is divided into “higher managerial, administrative and professional” (A), “intermediate managerial…” (B), “supervisory, clerical and junior managerial…” (C1), “skilled manual workers” (C2), “semi-skilled and unskilled manual workers” (D) and “state pensioners, casual and lowest grade workers, unemployed with state benefits only” (E).

In the press these are usually lumped together as ABC1 (the “middle class”) and C2DE (the “working class”). For many years, as the FT explains, Labour won clearly or heavily in the C2DE categories and the Tories won in ABC1, with the margins deciding who won the election.

However, the categories have always been problematic from a socialist point of view, and in recent decades have become more so. To be fair, those who invented them did not necessarily claim they had decisive social significance, but that is how they are often presented.

To start with, what jobs go into what category must be very arbitrary indeed. But in any case, what the categories represent in society has changed.

In the mid-1970s, Bs were less than 10pc of the population, C1s low 20s, and C2s about 35pc. Today, those figures are something like 23, 28 and 21. Or to take even more dramatic figures, in the late 60s about 65pc of households were C2DE and 35pc ABC1; in 2000 it crossed over at 50-50 (allowing the Guardian to proclaim that Britain is “more middle class than working class” for the first time); and today it is something like 45-55. Similar trends have taken place in many advanced capitalist countries.

From a Marxist viewpoint, it was never the case that the working class – those working for wages for the benefit of and under the control of capital – was only manual or blue collar workers. It was always spread across “social grades”, but decades before the NRS system was devised the bulk of the working class was manual. By the late 60s, this was less the case; and it is much less the case today.

The sociological “working class” declined most dramatically in the 80s and 90s not because, under triumphant Thatcherism, everyone’s standard of living was blossoming, but because at the same time as workers were under sustained attack, the nature of the capitalist economy and the work it was based on was changing. Many people will have become worse off in the process of moving from (unionised, relatively high paid, relatively secure, or so it seemed) “working class” jobs to (ununionised, low paid, insecure) “middle class” ones.

According to the NRS, the average income of C1s is something like £20,000, of Bs £28,000 and even of As, who account for only 4pc of the population, £37,000. (The ruling class, tiny in numbers, is invisible in this scheme.) Virtually all C1s, the big bulk of Bs, and many As, will have suffered during the offensive against wages and living standards following the 2008 crisis. These are workers, not some kind of elite.

When the Guardian wrote about Britain becoming more “middle-class”, it specifically argued this was bad news for the Labour Party and noted that Labour would have to win over many more C1s in order to win elections in future. Well, in 2010 the Tories beat Labour something like 39-28 in this category, and in 2015 by a slightly bigger margin. In 2017 Labour drew with the Tories or pulled slightly ahead of them, 41-40. C1s are the core of the wage working class in Britain today. Labour support also grew substantially among Bs, which would include teachers, social workers and similarly better off workers, though it was still well behind the Tories.

None of this is to deny the drifting apart of social class and political allegiance; or that there has been a political trend to the nationalist right with a specific rooting among sections of the working class, and in particular manual workers. Skilled manual workers, C2s, gave UKIP their strongest showing in 2015, followed fairly closely by DEs. It is therefore not necessarily surprising that while Labour gained among these categories in 2017, the Tories as the main inheritors of UKIP’s nationalist legacy gained more (leaving Labour clearly but less clearly ahead among DEs and somewhat behind among C2s). Hence Labour losing seats like Mansfield, Stoke on Trent South and Walsall North.

There is, however, another dimension to all this, namely age. “If class no longer divides Britons at the ballot box”, said the FT last year, “another characteristic has stepped into its place…” There has long been a trend for younger voters to lean further left, but, long fairly minor, it has now become radical. In 2010 18-24 year olds went Labour something like 31-30; in 2015, after the collapse of the Lib Dems, it was 41-32; this year, it was 67-18. (Contrast: Thatcher narrowly won the youth vote in 1979 and ’83.) Even 35-44 year olds voted Labour 50-Tory 30.

And, as the Guardian columnist Aditya Chakrabortty put it, “age has practically become a proxy for class”. With the shifts in the economy discussed above, so-called “middle-class” social grades are younger than the “working-class” ones. Moreover, over years, but particularly since the crash, white collar and even distinctively middle-class jobs have become much more proletarianised. More than ever, middle-class cultural cues and even educational privilege do not necessarily mean much economic privilege. This in addition to the fact that Labour is now most popular among young C2s and DEs (see the graph at the top of this article).

In 2017 Labour’s overall vote may well have become proportionately less blue-collar, and there is an issue there, a challenge for the labour movement. It has not become less working-class.

An important element of the weakness of the left, and to a lesser extent the labour movement as a whole, is its rooting in certain “middle-class” sections of the working class, in terms of job categories as well as educational background, ethnicity and other factors. But to see and try to address that problem is very different from accepting the idea that the working class is disappearing or that there is no longer a potential mass working-class base for the left.

Class has always been politically constituted – the working class is a class in itself, as Marx put it, with the shared experience of capitalist exploitation; but it only becomes a class for itself, to any degree self-conscious and united, with political education, organisation and struggle. Once organised workers had established a distinctively working-class party in Britain, with the founding of the Labour Party at the turn of the century, it would be decades before it would win anything like majority working-class support.

When working-class political consciousness and affiliation decayed from the 1970s and 80s, it was not so much because the nature of work and workers was changing, as because, as things developed, this was accompanied by or bound up with the defeat and sharp decline of organised labour.

The kind of politicising and consciousness-raising work that was done in the past will be done again, with a new working class, and this time we will do it better. The dramatic nature of the 2017 election should remind us what is possible.