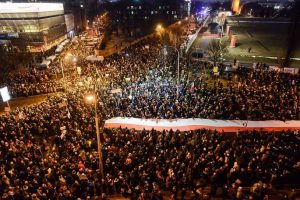 • Since this article was written for Clarion issue 13, a new attempt has been made to restrict abortion in Poland: see here for the latest. The photo above shows the new protests, approximately twice as big as the 2016 protests which beat back the previous attack.

“Abortion is ok”, declares a recent cover of a popular Polish women’s magazine.

Statements like this are met with huge controversy in a country where termination is largely a taboo, described as murder by one side, and by the other as an inevitably traumatic experience which should only be allowed in extremely difficult personal circumstances. Abortion as a woman’s choice is still far outside of the mainstream.

Until 1993, abortion in Poland was in practice available on demand. Under pressure from the Catholic Church, a new law came into place, banning abortion with three exceptions: a serious threat to the mother’s health, foetal deformation or when the pregnancy is a result of rape or incest. Even in these cases, doctors can refuse to perform terminations citing their conscience, leaving big areas of the country without access to legal abortion – unsurprisingly,the abortion underground is large and thriving.

This “abortion compromise”was never uncontroversial and has regularly come under attack, primarily from religious conservatives. In October 2016, a massive wave of protests stopped the far-right government from outlawing abortion completely. Another similar proposal was rejected in January this year.

However, feminists have not only defended existing rights but also gone on the offensive. A citizens’ petition to legalise abortion has twice reached the required 100,000 signatures to be discussed in Parliament. It was voted down both times, and among those opposing or abstaining were members of the so-called liberal opposition. Parties of the left, which unreservedly backed the proposal, currently have no parliamentary representation.

Until recently, feminism in Poland has suffered from an image of being a movement of the privileged, more concerned with abstract symbolic questions than the everyday worries of most women. Over the last two years, the struggle for reproductive rights saw perhaps the biggest ever mobilisation of Polish women as women, organising across class and political divides. To the legalistic battle,socialists and social democrats added demands around access to sex education, pre- and post-natal healthcare, childcare, housing and the resources necessary to raise a child.

Slogans aiming to destigmatise abortion have reached magazine covers, and a billboard campaign called “You’re Not Alone”was launched in six Polish cities, raising awareness of the fact that one in three women will have an abortion in their lifetime.

It will take much more than this to change both the law and attitudes in a deeply conservative country like Poland but the growing women’s movement finally makes it seem possible.